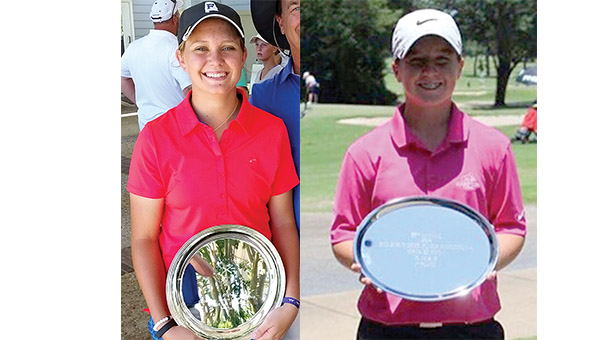 Anna Reid, left, and Caroline Webb, right, have been busy on the golf course this summer bringing home multiple awards from tournaments.

The Demopolis High School Golf team has stayed busy over the summer as Anna Reid, Caroline Webb and Mark Joseph Johnson have competed in tournaments to stay in top playing condition.
Reid, who signed to join the Faulkner University Women’s Golf team, finished in fifth place in the 16-18 age division and fifth overall in girls’ competition at the 55th Bud Burns Dixie Junior Tournament in Selma shooting rounds of 80 and 79.
Following that performance, Reid competed in the 53rd Alabama Girls State Junior Championship at Bent Brook Golf Club in Birmingham where she shot her lowest competitive score ever in the first round with a 69. She then shot a second round score of 74 and third score of 76 to close the three-day tournament with a score of 219 which was good for third place overall and second in here division.
Reid will compete in her final junior level tournament July 20-22 during the 26th Alabama Women’s Stroke Championship at TP Country Club in Cullman, Alabama. The recent DHS graduate finished second place last year in the non-championship division at Shoal Creek in Shelby County.
Webb played in a single day event at Arrowhead Country Club in Montgomery shooting a score of 84, which was good for a third-place tie in the 14 and under age group. She shot an 81 at the course during Sectionals to help the DHS Girls Golf team advance to the Sub-State Tournament.
The incoming freshman to DHS also played in the 55th Bud Burns Dixie Junior Tournament and won first place in the 13-15-year old division shooting rounds of 87 and 82, which also allowed Webb to finish in ninth place out of the 16 girls competing.
Johnson also made the trip to the 55th Bud Burns Dixie Junior Tournament. The University of West Alabama signee shot a 76 on the first day to qualify for the 36-hole championship playoff during round two where he shot an 84 during the first 18 holes and a 78 during the second round of 18 to finish the tournament with a 238 score, good for tie for 32nd out of the 52 qualifiers for the championship.