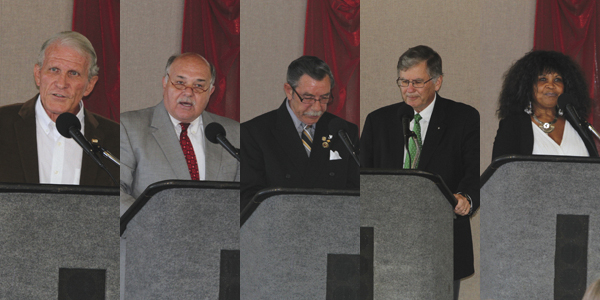 Every candidate running for mayor, city council, and Marengo County Commission District 2 were invited to speak in front of the audience about his or her candidacy and platform.

The first mayoral candidate to speak was Arthur Ogden.

In closing address, Ogden highlighted key points he wants to address as mayor. The first being fiscal reliability, not responsibility because it is assumed that the position comes with responsibility. The candidate then highlighted the need for strategic planning as the city needs a roadmap to know where it’s going.

The incumbent candidate, Mayor Mike Grayson, chose to focus on facts as opposed to “fluffed up campaign promises” by highlighting advances made by the city during his eight years as mayor.

“The city is financially sound as evidenced by a 2015 audit,” said Grayson. “Last year we put $653,000 in reserve without cutting any employees or reducing any services.”

The city has also increased sales tax revenue every except for 2011, when it was flat from the previous year.

The current mayor then highlighted the new businesses that have spawned on Highway 80, stating that the city is moving forward and the businesses wouldn’t be showing up if something wasn’t being done right.

“Compare Demopolis to the surrounding towns, we’re moving forward,” said Grayson. “Compare us to Linden, Uniontown, Eutaw or even Selma. If you want to even compare us to Thomasville, who’s had their share of success in the last few years. Their mayor, Sheldon Day, has been on the job for 20 years. In Tuscaloosa, Walt Maddox has been on the job for 12 years. Positive leadership equals political stability, which equals progress.”

In his closing, Grayson highlighted the fact the is the only candidate with any city council experience.

Don Singleton mentioned he began journey towards being mayor by going door-to-door and meeting citizens one on one.

“What a pleasure it has been to meet so many gracious people,” said Singleton. “I have been welcomed with open arms and respect. I greatly appreciate it.”

The mayoral candidate mentioned that his goal when running for mayor is and was to represent all of Demopolis as it is very important to meet and speak with all the people.

Singleton made clear that talking to the citizens is what’s needed to make important decisions and acquire what is needed to accomplish the hopes for a better future in the city.

Highlighting his past experience as a superintendent in managing a multi-million-dollar commercial construction company, Singleton feels that he has the experience in diversity needed to use all resources available to manage the city and fulfill its needs.

Singleton stated that all of his past endeavors have been accomplished from dedication and never giving up and he’s been inspired to give back to the city he’s called home for 26 years as mayor.

“It is my belief that the job requires honesty, hard work and someone who is in touch with the people,” said Singleton.

If elected, Singleton hopes to repair and revive the local economy by making new connections with industry and business owners and showing them Demopolis is a prime location for their needs.

“I’m used to dealing with large budgets and asking questions to ensure the investors, in this case the tax payers, are getting the best return on their money,” said Laney.

In the time he’s spent campaigning, Laney has learned more about Demopolis citizens including about the optimism of the youth. He noted that none of them feel like they won’t have a fair shot at life or they’ll have to leave here to find a job. Part of the governing goal, according to Laney, is to find a way to meet that expectation.

To accomplish this, Laney believes he must build belief that the city government represents the citizens; be a servant leader; be accessible to the people; visit all parts of the community and communicate with community leaders on a regular basis; have open debate and clear explanations of city funds; the city will be transparent and post on the city’s website the council’s agenda, meeting minutes and financial reports and add public comment opportunities to the meeting agenda; city departments will have the goal to be “best of class” for a city of the size of Demopolis; work out a partnership with other public boards to ensure they are working together cooperatively for what is best for all the people of Demopolis.

“I feel like I am the best candidate running with the situations Demopolis faces today,” said Laney.

Thedford A. Rowser-Hall-Bey was the final candidate to qualify for the mayoral race and is a relative newcomer to the Demopolis political scene. She believes she was called to run for the position of mayor.

“It’s He who asked me to run for office and that’s why I’m one of the last on the agenda to run and it’s an honor to be here,” said Rowser-Hall-Bey.

Rowser-Hall-Bey has held leadership positions during her time as a resident of Demopolis in local organizations as well as groups throughout the state of Alabama including co-captain of the U.S. Jones High School cheerleading team and held a license for the first temporary job search service in Demopolis.

Rowser-Hall-Bey’s goals are to continue the beautification of and great prosperity of the citizens and businesses of the city.

The mayoral candidate said she has looked into the possibility of bringing in new non-conflicting job opportunities to the area for the citizens, especially for the young adults. She also wants to improve healthcare and educational programs.

She also wants to have a better relationship with the citizens and the head officials of the city.

“It’s something that must be improved on all sides of the matter,” said Rowser-Hall-Bey.