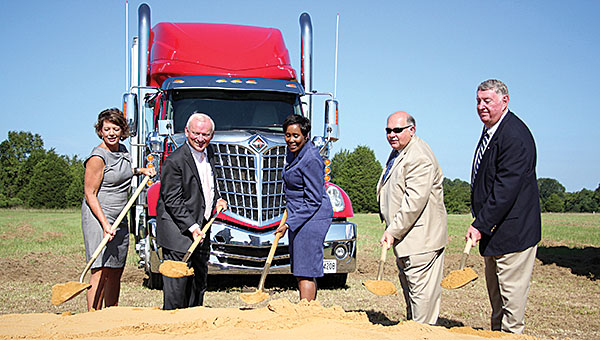 City officials and representatives of Shelton State Community College (SSCC) were on hand Aug. 17 for a special groundbreaking ceremony for a new truck driving training facility in Demopolis sponsored by the Tuscaloosa based community college.

The building to be located at the South Industrial Park will expand and enhance Shelton State’s current truck driver training program, is scheduled to open in 2017.

“This is an exciting opportunity for the College,” said Dr. Cynthia T. Anthony, Interim President of Shelton State. “We eagerly anticipate the growth this facility will provide, and we look forward to our continued working relationship with Mayor (Mike) Grayson, the city of Demopolis, the Industrial Development Board, and the support of other generous partners.”

Mayor Grayson was also on hand to speak about the process of acquiring the truck driving school.

“This has been a long process. This isn’t something that just popped up,” said Grayson. “Shelton State has an outstanding program and it’s just right up the road. It made a lot of sense for Shelton State and the city to pair up.”

Current Demopolis Industrial Development Board (IDB) Chairperson Woody Collins was on hand to give the history of the city attempting to get a truck driving school, which stretched back to 2002. Collins also mentioned how important former IDB Chair Diane Brooker, who was on hand, was to getting the project to this point.

In her address, Brooker mentioned how in her time as chair that the IDB made a commitment to providing resources current businesses needed in Demopolis to be successful. Over and over again the request for a truck driver school came up constantly.

The IDB was able to raise money to deed the land that would school to sit on to SSCC.
Brooker said the $150,000 State Economic Assistance Program grant provided by the Delta Regional Authority to help push the program and move the project forward. The former chair also noted the Alabama governor’s office for Region VI provided $480,000.
Those two gifts helped lower the cost of the nearly $1 million project, according to Brooker.

Smith also announced that Shelton State would now be allowed to recruit outside of its service area to recruit more students and help the system grow.