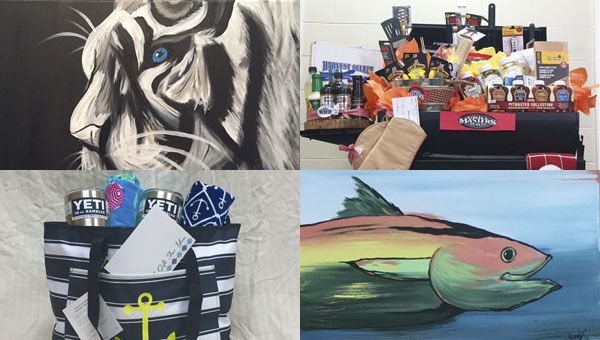 Along with the Grill Master pictured and the tote bag with Yeti tumblers, the West Alabama Christian Silent Auction will include original art (left) by local artists such as Brittany Lowe, Sierra Murphy, Meggin Maybe and LeAnn Andrews. The event will serve to help the school improve classroom and eventually build a new school.

Silent auction is to raise funds for the school and will serve as one of the primary fundraisers for the school this year. While WAC has never done one, the school will reach out to local groups who have done one to prepare for the event.

“We’re just trying to find something different, said Roni Long, Administrator of WAC. “This is something we’ve heard a lot of schools outside of our area do, so we wanted to try it to see if it would work for us and the area of Demopolis.”

The idea to try this fundraiser for the school was because it isn’t something done by any local schools and the silent auction can avoid overlapping with fundraisers from the other schools.

WAC Administrative Assistant Heather Basinger added, “We want to get the community involved too, it’s not just for West Alabama Christian School. This is something for the community and fun. We have a live band and stuff for people to have fun.”

Items auctioned include but are not limited to the following: Four Tickets to the Mississippi State vs. Alabama football game (Section F, Row 20), a mountain vacation giveaway, a beach vacation giveaway, a season-pass to all UWA Athletics home events, autographed baseball by Andy Pettitte, autographed basketball by Alabama Head Basketball Coach Avery Johnson, and much more.

Long said, “The community of Demopolis has been gracious in the items they’ve donated.”

The goal is for the auction to serve as a good and fun night out for the bidders in sort of upscale, formal way according to Long.

V.I.P tickets are on sell for $15 and will allow the holder of the ticket to pre-bid on some items that will also include a “buy it now” option for items at a certain price.

Money raised will go back to the school in the form of improving classrooms as well as going towards building a new school building. Currently, WAC is stationed in Fairhaven Baptist Church.

All teachers at the school are certified through the State of Alabama and American Association of Christian Schools and must be certified by the Association to teach at WAC.

Currently, WAC hosts 123 students, which is the largest enrollment ever.
WAC currently houses a Kindergarten through eighth grade program along with a nursery.