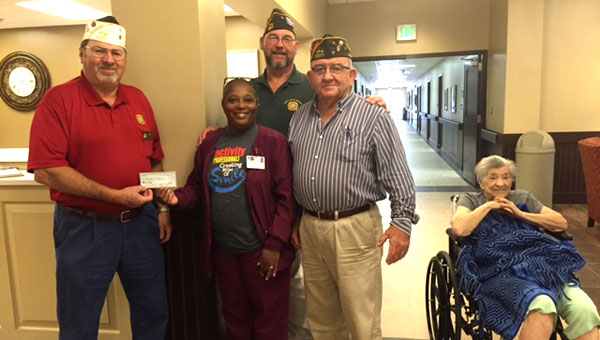 The post started with a trip to the Bill Nichols State Veterans Home in Alexander City, Alabama on July 20.

The Bill Nichols State Veterans Home has been home to hundreds of veterans since its opening in 1989. This was the first such facility constructed by the state. Being the first, it has four stories which is different from newer buildings that are one story. It also has a cafeteria for resident visitors and several recreational areas.

The home includes a table with a POW blanket and is called the empty table, remembrance of POWs. Also at the table is a plate and an empty chair to “set” for the return of a POW of Missing in Action soldier.

“It was a privilege to go down and meet these guys and ladies who devoted themselves to defending the nation and serving the country, and I was really moved by some of their stories,” said VFW Post 5377 Surgeon Phillip Spence. “They did what they swore they would do. They made a pledge to the country to go out and defend it and when they’re time came the nation would take care of them. The state of Alabama has done a good job.”

The VFW Post also presented a donation to the nursing home for residents to get items that are not normally covered under the budget, such as socks, underwear and pajamas or even to hold special social events.

The local post members toured the facility and spent time with its residents.

The dinner also included a birthday cake as well as the sharing of stories and future plans for interactions between the two groups.

According to Spence, USCGC Wedge Commander Derek Spivey mentioned that he plans to have the ship docked at the city landing for Christmas on the River for tours. Spivey would like to decorate the ship, but doesn’t have the money for decorative lights in his budget.