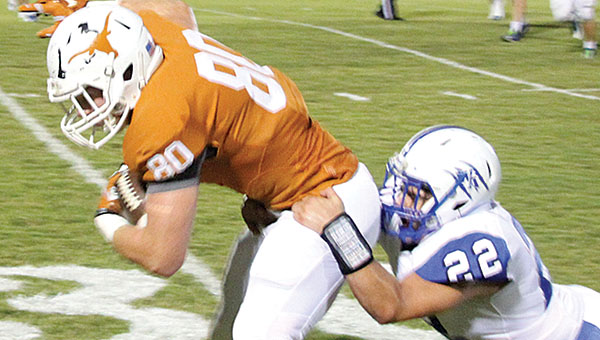 Landon Houlditch attempts to elude a Wilcox Academy tackler after one of multiple receptions on the night.

The Marengo Academy Longhorns improved to a 7-1 record on the season, flexing their muscle on both defense and offense as they secured a shutout victory over Wilcox Academy, 49-0.
The Longhorns would get on the board almost midway through the first quarter. Taking advantage of a very short punt by the Wildcats, Marengo Academy took possession at the 24 and on the first play Jacob Beck found running room for 15 yards. Weldon Aydelott finished the job with a 5-yard run into the endzone. Hayden Megginson’s point-after attempt was good for the 7-0 lead.
The next Longhorn series featured strong runs by Beck, Aydelott and Megginson, but the drive came down to a fourth and goal from the 12. From their senior quarterback Robert Tutt found his favorite target of the evening, fellow senior Landon Houldtich, in the endzone for the touchdown. Megginson’s point-after lifted the lead to 14-0.
The Longhorns went to the passing agame again on the first play of their next possession as Tutt found Daniel McCray for a very nice 30-yard gain across the middle of the field. Beck took the bulk of the handoffs on the dirve, but it was Aydelott that got the call from the 3-yard line where he punched his way into the endzone. The point-after was good, giving the Longhorns a 21-0 edge early in the second.
The defense followed with what appeared to be a pick-six by Tutt, but a block-in-the-back brought it back to the 30-yard line. The possession would end with an interception going the other way.
The Longhorns would once again get decent field position when the defense stopped Wilcox on a fourth down at the Wildcat 31. Only three plays in, Megginson would dodge a few tacklers and scramble 25 yards for the score. Megginson’s PAT lifted MA to a 28-0 halftime lead.
Early in the third, MA’s defense came up big when D.J. Nettles fell on a fumble at the Wildcat 30. Another pass from Tutt to Houlditch put the Longhorns in the red zone and Megginson would seal the drive with an 11-yard scamper to the endzone. The PAT made the score 35-0.
The defense kept playing strong, holding WA on a fourth down at one point and seeing Tutt get his second interception of the night.
After that interception, MA would score on a 1-yard run from Gavin Thompson.
The final score of the evening was on a 5-yard dive into the endzone by Cameron Peppenhorst.