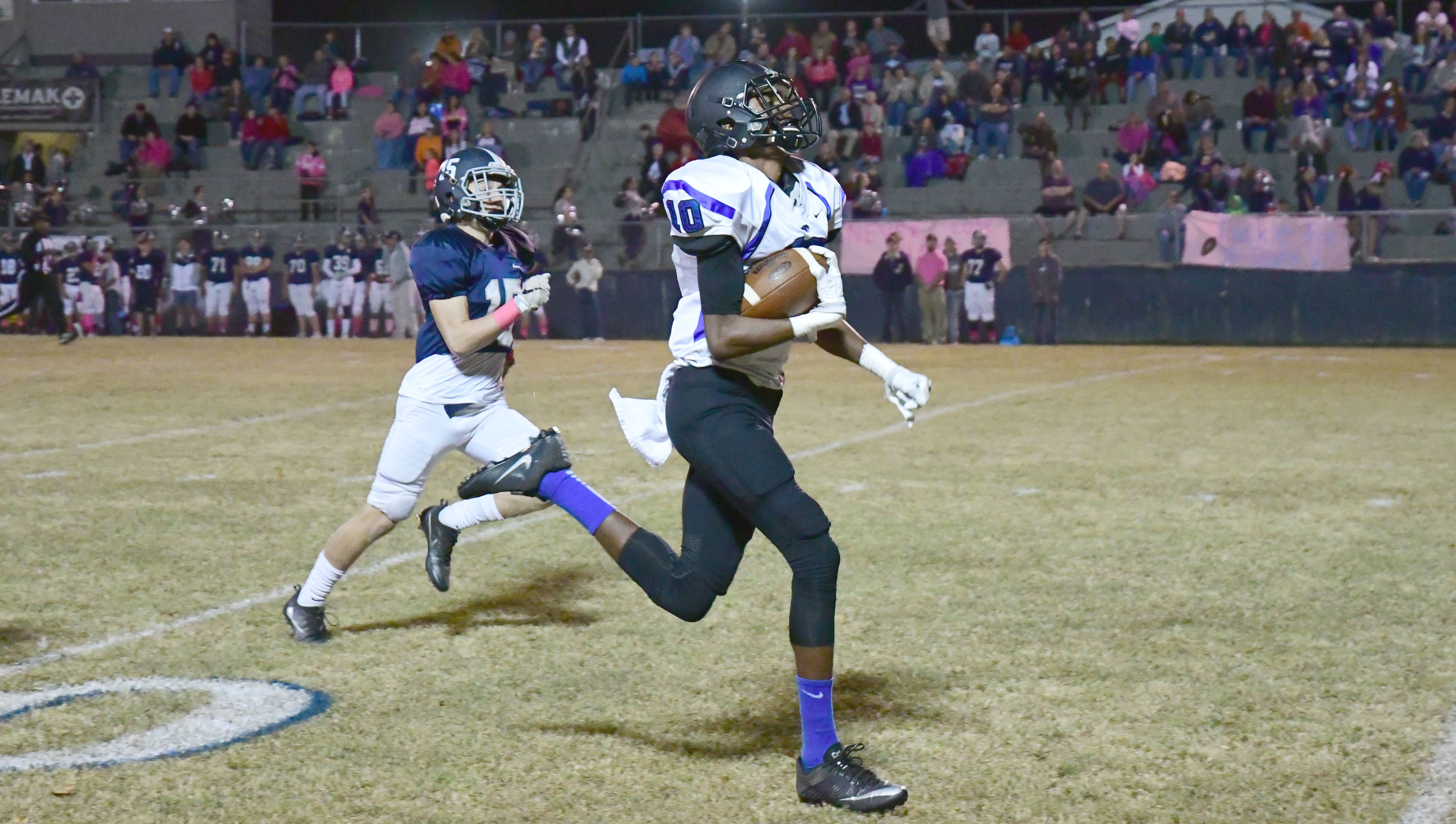 William Wilkens carried the ball six times for 118 yards and two touchdowns during the Tigers’ 45-14 homecoming victory over Sumter Central.

The visitors hung as tough as they could, but in the end the Tigers proved to be too much as Demopolis High School collected a 45-14 homecoming victory over the Sumter Central Jaguars in Class 5A Region 3 competition.
“They played hard Coach (Charles) Graves has done a fantastic job with those kids and that program and they just played us hard,” said Demopolis Head coach Stacy Luker. “But we grinded through another one and this was a good win.”
DHS (6-1, 5-0) once again leaned on a dominant ground game in the victory rushing for 368 on 53 running plays. The Tigers finished with 429 total yards while limiting the Jaguars (1-7, 1-4) to just 154 yards.
A.J. Jackson ran for 92 yards and two touchdowns while William Wilkins crossed the century mark with 118 yards and a score on six carries. Quarterback Logan McVay found the endzone three times on short runs with the longest being from 8 yards out.
Defensively, R.J. Cox lead the way with five solo tackles and five assists while A.J. Besteder came up with three solo stops and three assists.
Lineman Khyrim Bryant left his mark on the game blocking a Sumter Central punt in the fourth quarter.
McVay opened the scoring with 5:14 in the first quarter as DHS capped a 15-play drive with a 2-yard score to grab a 7-0 lead.
On the next drive, Jackson found the endzone as the first quarter clock expired from two-yards out to push the lead to 14-0.
Wilkins then scored his only touchdown in the second quarter from 12-yards out. McVay connected with Matt Beckum in the back of the endzone for a two-point conversion to push the lead to 22-0.
Sumter Central did not go quietly in the night however, using a big passing play to setup 2-yard touchdown and a successful two-point conversion to cut the lead to 22-8 which would be the score at the half.
In the third, Jackson ran for a 3-yard score to give Demopolis a 29-8 lead.
However, the Jaguars would respond with 41 seconds left in the third scoring on a pass play from 23-yards out to pull the score to 29-14.
That’s as close as it would get as McVay added two more fourth quarter touchdowns, coupled with Bryant’s punt block safety the Tigers pushed the lead to its 45-14 final.
“At times I didn’t think we had a lot of passion about ourselves or consistency on either side of the ball, but they’re still working and trying to get better,” said Luker. “We’re still sort of a work in progress. It’s a good win. It’s always good to win a football game and I thought we finished well tonight which is important.”
Next week, the Tigers step away from region play to face Class 7A Enterprise (7-1) on the road. The Wildcats are coming off 52-7 win over Smiths Station.