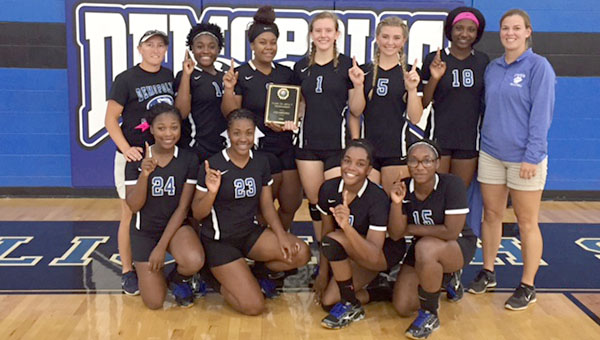 The Demopolis High School varsity volleyball team won the Class 5A Area 7 championship and advanced to the quarterfinals of the South Super Regional for the first time ever.

After claiming the Class 5A Area 7 championship, the Demopolis High School varsity volleyball team advanced further than it ever had, reaching the quarterfinals of the South Super Regional Tournament. However, the Lady Tigers fell in the round ending a magnificent season at the Crampton-Bowl Multiplex in Montgomery on Oct. 20.

“A win at regionals was a big deal for our girls,” said Head coach Brittany Dunson. “They’ve been going every year they’ve played for DHS and haven’t gotten to make it past the first game until then. As coaches we are super happy with the season we had this year. The girls played well together and made huge strides.”

From there, DHS traveled to Montgomery and faced Charles Henderson in the first round where the Lady Tigers took a 3-1 victory (24-26, 25-21, 25-13, 25-18) to advance past the first round of the regional tournament for the first time in program history.

However, the celebration would be short lived as Demopolis met St. Paul’s in the quarterfinals and the perennial volleyball power defeated DHS 3-0 (25-8, 25-9, 25-18) to end the season.

Only losing two seniors, Ja’Kayla Bell and Kanigia Pelt, the Lady Tigers will look to improve in the offseason with new confidence and look to move further in the playoffs next year.