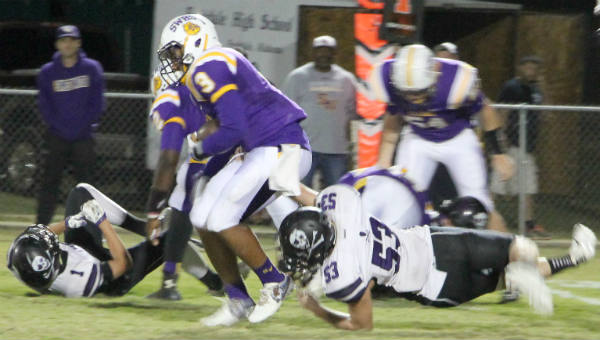 R.J. Rodgers pulls away from a Fruitdale defender for positive yardage in Friday night’s game in Sweet Water.

The Sweet Water Bulldogs made quick work of Fruitdale Friday night, scoring early and often on their way to a 60-0 region victory.

Explosive plays, including several turnovers and a defensive touchdown early, paved the way to 40-0 halftime lead.

The Bulldogs were led on the ground by R.J. Rodgets with 113 yards on only 4 carries. Jaylin Johnson added 91 yards to the teams total 342 yards rushing.

Quarterback Jonah Smith threw for two touchdowns, both to Will Huckabee, and 48 yards.

The defense was all over Fruitdale and that led to five fumble recoveries and four interceptions for the Bulldog squad. Fruitdale ended the game with 118 total yards of offense.

Sweet Water scored on its first possession with on the first TD pass from Smith to Huckabee from the 24-yard line. Smith’s PAT was good.

The next three scores for Sweet Water came in a hurry. On Fruitdale’s following possession, RJ Rodgers returned an interception for a touchdown and that was followed by the second 24-yard pass from Smith to Huckabee for a score. A fumble set up a 16-yard TD run by Shamar Lewis, making the score 27-0 with 9:05 still to go in the first.

The Bulldogs would score again at about the five minute mark of the quarter when Lewis found a hole and scamped 33 yards into the endzone to increase the lead to 34-0.

The second quarter began much like the first one ended, with Sweet Water making a big play. From their own 20-yard line, Rodgers found running room and went all the way for an 80-yard TD. Smith’s PAT was blocked, the second block of the game for Fruitdale, but Sweet Water still held a 40-0 lead.

The Bulldogs would finish the second half with two more touchdowns. Xavier Lewis punched the ball in from two yards out at the 5:38 mark and Jaylin Johnson scored on a 41-yard scamper, giving Sweet Water a 53-0 edge going into halftime.

Sweet Water scored one more time in the game when Braiden Broussard went into the endzone from 8 yards out. Smith’s PAT made the final score 60-0.

The win lifts the Bulldogs to 6-2 on the season and are 6-1 in region play. Sweet Water has clinched the second seed in the playoffs and will host the first round. But first, they will host non-region opponent New Brockton on Oct. 28.