Demopolis falls at home to Lincoln, 27-24 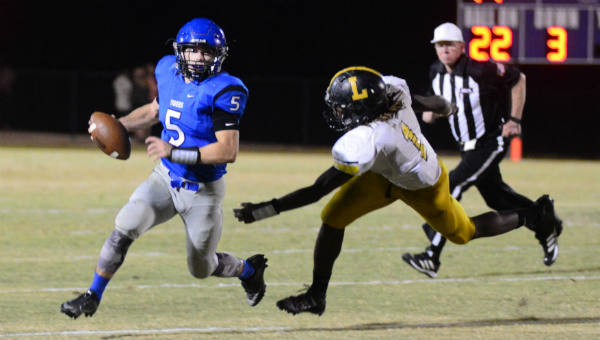 Demopolis High School football season draws to a close as the Lincoln Golden Beats used a 15-point fourth quarter to claim a shocking 27-24 victory in Tiger Stadium Friday night in the first round of the Class 5A AHSAA playoffs.

“We didn’t do the things we’ve needed to since the first of June to win this game,” said Demopolis Head coach Stacy Luker. “They deserved it. They outplayed us, out hit us and out executed us.”

Montrell Johnson, who was dynamic as a runner and passer for Lincoln, responded with a long run to setup a QB keeper for a touchdown to give the Golden Bears a 7-3 lead.

Following a Lincoln field goal that retied the game at 10-10, Jackson found the endzone for the second time of the evening from 6-yards out to put Demopolis on top 17-10 which would be the lead the Tigers took to the half after Clay McVay missed a field goal as time expired.

Lincoln opened scoring in the second half as Johnson found Quindarious Carter on a 57-yard touchdown just seconds into the third quarter, but a botched snap on the PAT allowed DHS to retain a 17-16 lead.

Demopolis then pushed the lead further when AJ Besteder scored from 5-yards out with a minute left in the third to give the Tigers a 24-16 lead.

It was all Lincoln from there as the Golden Bears converted key plays at the right time that lead to a 40-yard field goal to cut the lead to 24-19 with 5:41 left.

Logan McVay was intercepted by Carter at the DHS 49-yard line which lead to a short touchdown run for Lejehryes Carmichael , who then tossed a two-point conversion to Weston Perry to put Lincoln up 27-24.

Demopolis would have one last drive and got to the 30-yard line with 42 seconds left. However, William Wilkins was tackled in bounds and the referee didn’t set the ball in the timely manner. From there, DHS drew a false start penalty to make McVay’s field goal attempt longer. The 42-yard attempt fell short and clinched a win for Lincoln.

As a unit, DHS outgained Lincoln 329 yards compared to 294 for the visitors.

Lincoln (4-7) will host Jackson High School in the second round. Demopolis finishes the season at 7-4.