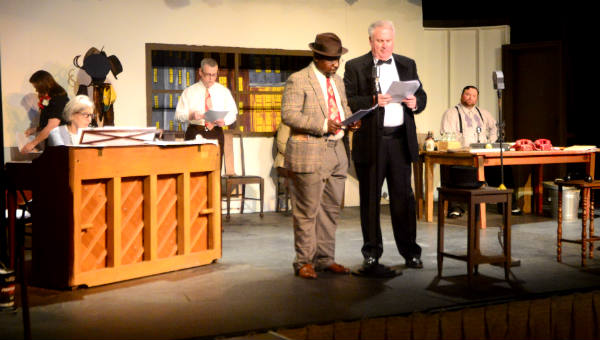 The Canebrake Players prepare for “It’s a Wonderful Life.”

The Canebrake Players as part of their holiday tradition will present the show “It’s a Wonderful Life: A Live Radio Play” starting on Dec. 3 at 2 p.m , continuing on Dec 8 and Dec. 9 at 7 p.m. and finishing on Dec. 10 at 2 p.m. at the Canebrake Theatre housed at the old school on Main Street.

The original film, produced and directed by Frank Capra in 1946, features the character George Bailey who is a man who has given up on his dreams in order to help others. His imminent suicide on Christmas Eve brings about the intervention of his guardian angel Clarence Odbody, who shows George all the lives he touched at what life would be like if George were never born.

“It’s pretty much on point with the movie. If you’ve ever seen the movie, you can hear the words come out just like in that,” said Director Kelley Mullins. “The only difference is the way it’s being presented on this stage is like a 1940’s radio play. The audience here is the studio audience for the play that’s being broadcast nationwide.”

According to Mullins, five actors will play 20 different characters by using voice changes and scene changes done with music.

“You have to immerse yourself in what a 1940’s radio play was like and kind of look at it from that context,” said Mullins.

Because of the way the show is being presented, actors will have scripts on stage because actors had their script during the radio plays back then. However, the actors still had to learn the lines enough to be able to bring multiple characters with distinct personalities to life at the same time.

“That can be difficult when you’re playing some many characters, so our rehearsal struggles were in the process of learning these characters,” said Mullins. “Some scenes the actors are playing two characters against each other, so it’s switching from one character to the next without rushing it or making it sound bad.”

Another unique thing about this play as that all sound effects will be coming from a foley artist handling the sounds during the show on the stage as opposed to the sound booth. A pianist will be on stage as well playing all of the transitional music between the scenes.