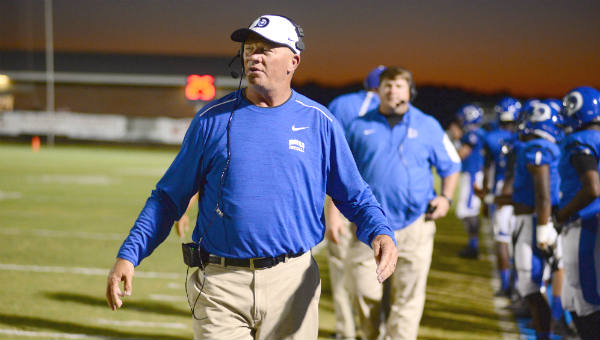 On the heels of a second consecutive region championship, Stacy Luker has announced on Monday his intent to resign as the Demopolis High School head football coach. The resignation won’t be official until a called Demopolis City Schools Board of Education meeting on Monday, Dec. 12, at 11 a.m. at the central office.

Citing the he no longer felt that he was the “right fit,” Luker is moving on from the program.

After Monday night’s BOE meeting, Superintendent Kyle Kallhoff said that he and the board will start a search to replace Luker with the best candidate possible. The job will officially be posted during the Christmas break with hopes of having the position filled by February or March.

With resigning from the coaching role, Luker also left his teaching role.

The Tigers compiled a 17-7 record under Luker in his two years at helm at DHS including going 10-3 with a trip to the quarterfinals of the AHSAA playoffs for the first time since 2009 in his first year and a perfect 13-0 region mark during both seasons.

Luker has compiled a career record of 194-78 with the most success coming at his Alma Mater Sweet Water High School, where Luker coached from 2002 to 2013 while collecting 131 wins and five Class 1A State Championships.

Luker began his head coaching career with two years in Washington County in 1996 before spending five years in Thomasville before taking the head coaching position at Sweet Water High School. After retiring from the Alabama school system, Luker spent a year at NeShoba Central in Mississippi posting a 6-5 record before accepting the job in Demopolis leading up to the 2015 season.

Luker could not be reached for further comment as of press time on Tuesday.