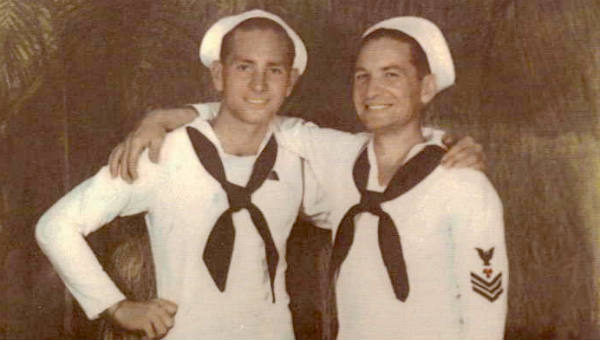 The USS Oklahoma was among the Navy vessels sunk at Pearl Harbor. On board was Water Tender 1st Class Walter Henry Sollie of Myrtlewood, pictured on the right. His remains were recently identified. Plans are underway to bring Sollie’s remains to the Pensacola Naval Air Station in Pensacola to be interred at the Barrancas National Cemetery. Sollie’s brother, Fred, who was also at Pearl Harbor that day is said to have witnessed the attack on the USS Oklahoma.

December 7, 2016 will mark 75 years since the sneak Japanese attack on our Pacific Fleet stationed at Pearl Harbor. It was a tragic day in the annals of history for the loss of life suffered and the extensive damage to our fleet during the attack. The unsuspecting military and civilian personnel were taken by surprise at about 7:53 A.M. on a quiet Sunday morning along Battleship Row. Wave after wave of Japanese aircraft from nearby carriers strafed and bombed the stationary ships at Pearl Harbor and  aircraft at surrounding airfields.

President Franklin D. Roosevelt in his address to a Joint Session of Congress on December 8, 1941 remarked December 7, 1941 was ““a date which will live in infamy.” It has certainly lived up to that assessment by then President Roosevelt.

As a brief refresher of the loss of life and devastation, the following summary is offered. According to the National Park Service numbers, (numbers still vary slightly) a total of 2388 Americans lost their lives that day. There were 1998 Navy personnel, 109 Marines, 233 Army, and 48 civilian casualties. The wounded during the attack accounted for another 1178.

The loss of life was tragic and the damage to the fleet was devastating. There were 4 battleships sunk, and 4 others heavily damaged. There were also other ships damaged or sunk including  three cruisers, three destroyers, an anti-aircraft training ship, and a minelayer. In addition to the ships, 164 aircraft were destroyed and another 159 damaged.  It was a devastating day for the Pacific Fleet as well as the United States of America. This attack plunged the United States head first into World War II.

One of the battleships sunk was the USS Oklahoma (BB-37). On board the Oklahoma was a Navy veteran of 18 years from the sleepy little community of Myrtlewood in Marengo County, Alabama. Water Tender 1st Class (WT1C) Walter H. Sollie was one of 429 casualties aboard the Oklahoma. He grew up in Myrtlewood under loving parents Frederick Ernest and Florence Vallie McCrary Sollie as their first born. The Sollie’s were blessed with 6 children, Walter H., Ernest M., Nina Mae Sollie Cobb, Harris T., Raymond M, and  Fred E. all now deceased. Grandfathers Frederick E. Sollie and Budd McCrary also lived in the Myrtlewood area and were Civil War Veterans. The family lived in the Myrtlewood and Campground area until the late 20’s when they moved to Atmore, Alabama.

WT1C Sollie was born November 23, 1904 and joined the Navy June 7, 1923 at the tender age of 18. He had tours of duty on the USS Huron and the USS North Hampton before being assigned to the USS Oklahoma. In 1935, Sollie married, but the marriage dissolved some years later after their 2 year old son died. At the time of the attack, he was engaged to a lady in waiting in San Diego, California..

On the morning of the attack, Sollie was on duty in the No. 4  Fire Room and was due to be relieved at 8:00 A.M. His brother Fred was also at Pearl Harbor serving on a smaller ship, the USS Schley and saw the Oklahoma explode, burn and turn over. The brothers were planning on going to a movie that same Sunday afternoon together.

According to the Defense Department, 35 members of the Oklahoma were identified and buried in the years after the attack. By 1950, the remaining  unidentified members were buried as unknowns at the National Memorial Cemetery of the Pacific. Last year on April 14, 2015 the Defense Department announced they would exhume those buried as unknowns from the Oklahoma in an attempt to identify the remains. They lifted 61 rusty caskets from 45 graves with what is believed to be the remaining 388 in the operation.

Close relatives of the deceased were asked to give DNA samples for the tedious process of identifying the remains. On August 18, 2016, Mrs. Iris Sollie Plowman, niece of Walter H. Sollie, and other members of the family were notified a positive identification had been made. The family then began talks with the Defense POW/MIA Accounting Agency (DPAA) for the transfer of remains to the family. It has been a long and exhaustive process for the family of WT1C Walter H. Sollie. However, they are appreciative for the efforts made on their behalf and the diligence of the DPAA. They meet again December 6 with representatives of the DPAA to finalize the plans of transfer.

As it stands right now, on January 6, 2017 the remains will be flown to the Pensacola Naval Air Station to be interred at the Barrancas National Cemetery. The family chose Pensacola because Iris Plowman’s father and mother, Fred and Rebie Sollie, are interred there. Fred, a career Navy veteran, witnessed the Oklahoma under attack. Iris Plowman’s grandson, Hunter Price, active duty Coast Guardsman serving on Lake Michigan, will be flown out to escort the remains to Pensacola.

This is a story of heartbreak, perseverance, determination, patience and patriotism above and beyond the call of duty. The families perseverance in identifying and bring Sollie home paid off.  It is a lesson for all to be reminded, “freedom isn’t free,” there is a price to be paid. Men like WT1C Walter H. Sollie have paid that price with their lives, and his family has paid too in tears and suffering over the loss of a loved one. Home at last fellow patriot, R.I.P.