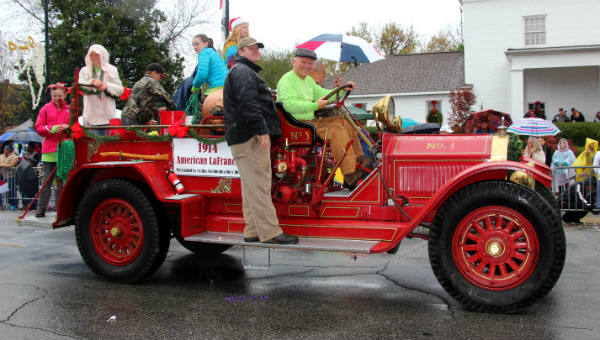 Woody Collins drives the old fire truck through town during a rainy COTR in 2016.

Featured prominently on the back of the 2016 Christmas on the River T-shirt is an old firetruck. While the firetruck has been a staple of the parade for many years, younger and new members of the community might not know the significance of the truck as it relates to the history of Demopolis and COTR.

“The fire truck is on there as a gracious gesture toward my father (Barry),” said Woody Collins. “He was one of the founders of COTR. He and Mem Webb founded back in 1971.”

Collins then went on to explain that in 1976, the city was set to celebrate the United States of America’s bicentennial. Mrs. Gwen Turner approached Barry Collins to do something special in the community to celebrate the country.

According to Woody Collins, in 1914 Demopolis bought its first motorized fire truck brand new off the assembly line from the largest manufacturer in the world, American LaFrance.

In the late 1940s after years of use by the city, a shed was built in the park to cover the truck and let it sit there to be seen and played on by young people in the community. Cement was poured into the tires of the truck so that it wouldn’t roll.

“From 1948, every kid in Demopolis drove that fire truck a million miles,” said Collins. “I have driven it I can’t tell you how many days sitting up there playing on it. We used to love to go to the park and ride the old fire truck. Every kid my age loved doing it.”

Gwen Turner strongly suggested to Barry Collins to get the truck and get it restored. After the course of so many years of kids playing on it, the truck had received a significant amount of damage.

Through donations from the community and private donors, Barry Collins only had to spend nearly $2000 of his own money to get the truck restored but the project was accomplished.

Around 20 years ago, Woody had the truck deeded to Collins Communications, where it resides now, so that he could get insurance to cover it as it rides through the parade.

Through the years the truck has been such a featured part of the parade, it has become synonymous with the event despite missing a few years due to insurance issues.

“The most fun thing in the world is driving in that COTR parade and watching those kids who have never seen it, point and their eyes get big and smile. Then I spin that siren. That’s the most fun thing you can do,” said Collins.