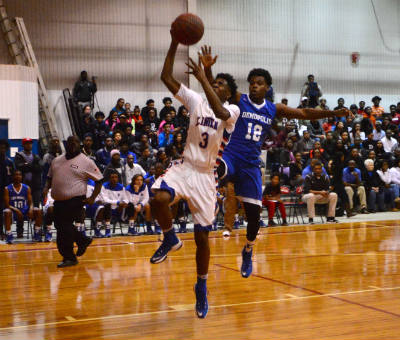 Jaquarius Varner, going for a layup against Melvin Childers of DHS, was one of four Patriots in double figures in the 55-44 victory over Demopolis.

Each time the Demopolis Tigers pulled close, the Linden Patriots had an answer and pushed away from DHS to earn a 55-44 victory in the season opener for the Patriots.

Linden was led by a quartet of players in double figures as junior Isaiah Scott finished with 15 points to lead the way, followed by Deantre Johnson with 12 points, Dequan Charleston scored 11 and Jarquarius Varner with 10 points to round out the trio of seniors leading the charge for the Patriots.

Shakari Williams scored nine points while Melvin Childers and Darius Birl each scored eight to round out the Tigers top scorers.

The Patriots led for the majority of the contest racing out to an early 18-11 lead to end the first quarter.

Neither team would be able to duplicate that hot shooting in the third quarter with Demopolis taking a slight 7-5 edge in points to pull the score to 37-32 entering the final quarter.

However, that’s the closest the Tigers would get as Linden used free throws and timely shooting to put away DHS 55-44 in the closing minutes.

The Patriots return to the hardwood on Dec. 13 on the road to face Francis Marion.