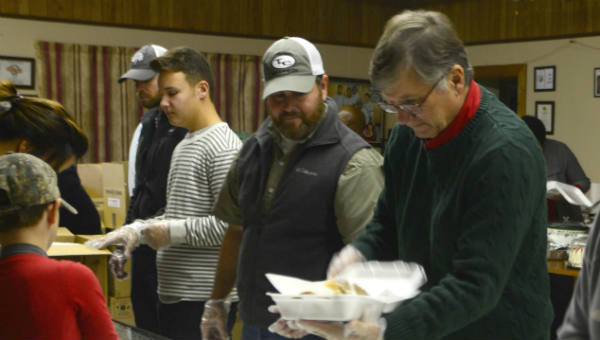 Demopolis Mayor John Laney was on hand at Kora’s Place Restaurant along with dozens of volunteers including other city and Marengo County and Sumter County officials volunteering time on the morning of Christmas Eve putting together plates for members of the community in Demopolis and surrounding communities in Marengo, Hale, Greene and Sumter Counties. In all, the Coming Together Organization and the group of volunteers on hand were able to make 2,550 plates to feed the community.

Demopolis City officials and members of this community as well as volunteers from Marengo, Greene, Hale and Sumter counties gathered at Kora’s Place Restaurant on Christmas Eve to prepare plates of food for the Coming Together Organization’s (CTO) annual Christmas Feeding.

The holiday tradition has lasted over 30 years in the area and has the group and volunteers work together in an assembly line to prepare food plates that are transported to those in need.

Although the practice has been going on for quite sometime, it has become an increasingly difficult task for CTO.

“It gets harder. Donations are way off and you’re trying to do a lot more with a lot less,” said CTO President Willard Williams. “But God is in charge and God’s working it out. It’s whatever he wants it to be, because we couldn’t do it without God’s help and I’m seeing miracle after miracle. The donations were off, but God worked a miracle where we could get some stuff at a reduced price. It works out.”

However, through the spirit of giving, CTO continues to work hard to make a positive impact on the community.

In all, CTO and the volunteers were able to prepare 2,550 plates to deliver in local black belt communities.

Additional, on Dec. 18, CTO held its annual “Give a Child a Wish” project at the Theo Ratliff Activity Center and provide 550 gifts to children and families who were without gifts heading into the holiday season.