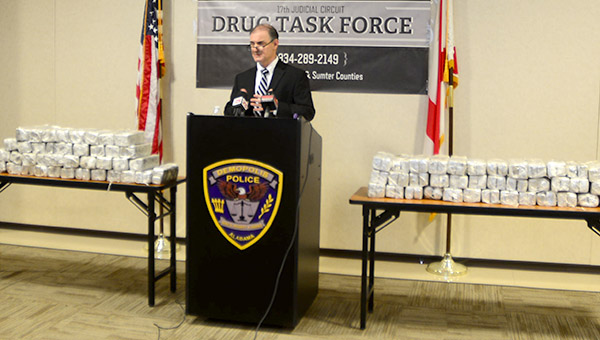 Greg Griggers, district attorney for the 17th Judicial District, speaks at a news conference Wednesday regarding the seizure of 176 pounds of cocaine valued at $2 million. The seizure came when a truck was pulled over on I-20/59 for a traffic violation.

During a traffic stop on Interstate 20/59 in Greene County on Dec. 22, the 17th Judicial Task Force seized over $2 million worth of cocaine. The seizure was the largest in the history of the task force.
The stop occurred when an officer pulled over a tractor-trailer for a traffic violation, according to District Attorney Greg Griggers who spoke about the incident Wednesday at a press conference at the Demopolis Police Department.
“You’re pleased that you’ve seized this much drugs and kept them off the street,” said Griggers about the task force’s job in stopping the truck. “You make small cases and once in a while something like this comes along. I think it’s professionally satisfying to those agents that work hard every day. They realize what an impact this makes.”
The officer noted inconsistencies in the tractor-trailer’s paperwork regarding the content it was hauling leading to the decision to search the truck. Upon that search, officials said he found a secret compartment hiding the cocaine.
Once the drugs were seized, the task force recovered 76 kilos, or 176 pounds, of cocaine from the truck with an estimated price of $2.2 million.
Griggers said the task force would not provide specific information about the driver of the truck in custody or other information about the case as he said his office is continuing to investigate the case all the way though.
“We will make every effort we can to determine who the parties are on either end and see if we can turn this into something better than it already is,” Griggers said.
Griggers did say the driver of the truck has been charged with drug trafficking.