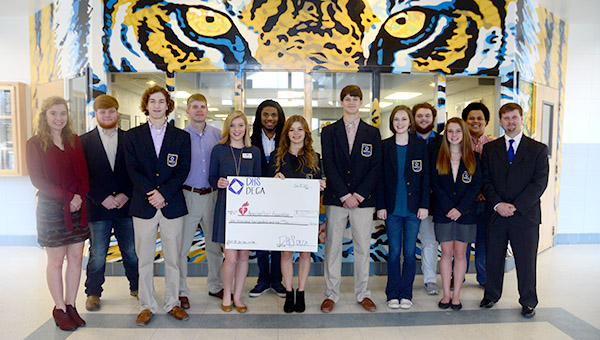 The Demopolis High School DECA Club raised $1,200 through the “Running to the Beat 5K” on Nov. 12. The funds were presented to the American Heart Association this week. The 5K event was fully promoted by the student members of the club.

With a representative on hand, the Demopolis High School DECA club donated $1,200 to the American Heart Association on Jan. 28 with funds raised during the club’s “Running to the Beat 5K” back on Nov. 12, 2016.
“This is kind of a different event from what most schools typically do. Most elementary schools do “Jump Rope for Heart” and middle schools do “Hoops for Heart,” said AHA representative Taylor Cos. “Reaching out to the high school is kind of a big deal, because we don’t have a lot high schools participate.”
Since not many high schools participate, the local group had some leeway to create their own idea to raise money for AHA.
DHS DECA decided to do the 5K out of a student led desire to hold a race and do so for a worthy cause.
“My grandfather and my father both have heart problems, so it was something near and dear to my heart,” said Lauren Boone. “Running is also a part of my family, so we wanted to do a 5K to raise money for the American Heart Association.”
Money received from this event and others like it by the AHA goes to medical research, hospitals and doctors according to Cos.
The AHA is also a part of the National Stroke Association and money and research will also go towards stroke and heart attack prevention, streamlining hands only CPR, defibrillators and teaching CPR in schools.
According to Boone’s cohorts, Chandler Barton and Hudson Holley, both friends who attend First Baptist Church in town with Boone, the group used a variety of social media to promote the event including a school wide video.
Putting together an event like this from idea to reality was quite an accomplishment for the group.
“It was really satisfying. As a group, we’ve never put together a 5K before, so to forget out what all goes into actually putting one on and then for a first-time race to have over 60 people there is a big deal no matter where you are but especially in a small town” said Boone.
“The fact that they got it accomplished and that they had such an amazing event is awesome,” said Cos. “It’s pretty inspiring to have high school students dedicated to want to put on a big event.”
Boone said the hardest part of putting on the event was getting different entities on board to get the race setup like the school board and City of Demopolis for example while the most fun part was race day itself.

(This story originally appeared in the Saturday, Jan. 21, 2017, edition of the Demopolis Times.)