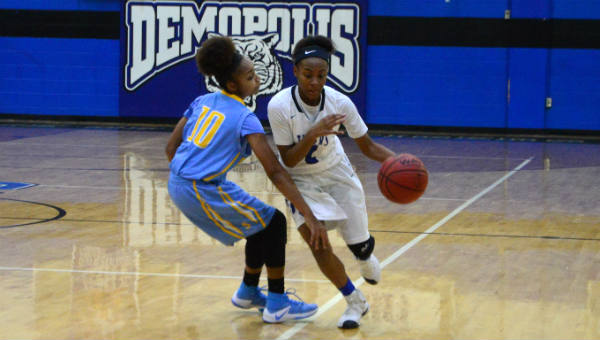 Aniya Johnson drives to the hoop against Selma

After taking a one point lead with just 16.9 seconds left thanks to a break away layup off a steal by Shakesaney Bell, the game seemed in hand. However, after getting the initial stop on defense, the Demopolis High School Lady Tigers fouled Selma’s Aaliyah Hatcher who sank two free throws which spelled defeat in the 42-41 loss on Jan. 26.

DHS fouled Hatcher, who grabbed an offensive rebound to setup the opportunity with just 1.2 seconds left in the game.

Despite the late loss, Lady Tigers Head coach Tony Pittman was proud of the team’s effort against the 21-1 Lady Saints.

“We knew going in that we could play with them. The thing about this young bunch is, after they play you one time, their confidence just grows. Next look we get at you, we’re going to play. I knew we were going to be ready to play because of the way we practiced,” said Pittman. “This team is just growing up by leaps and bounds. We’re seeing some different kids come off the bench to play and I’m excited about what’s to come. I still think we’ve got good ball coming.”

In the game, Demopolis led by 12-3 at the of the first and then 27-8 at the half before clamping down even harder in the third quarter on defense with a staggering 19-4 margin.