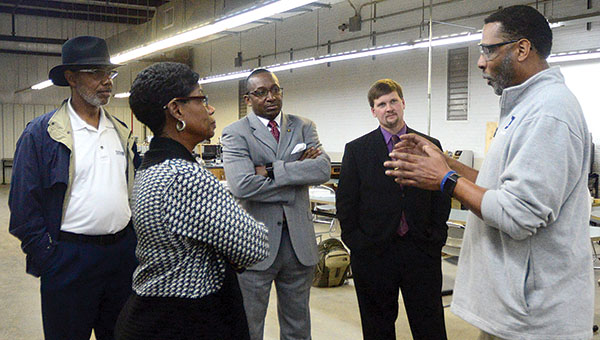 Charles Jones speaks Tuesday with State Representatives A.J. McCampbell and Bobby Singleton, back from right, as well as Demopolis Superintendent Kyle Kallhoff and School Board Member Carolyn Moore. The legislators received a tour of the career tech facility and visited the gifted classroom at U.S. Jones Elementary.

During their visit to the Career Tech Center, instructor Charles Jones took McCampbell and Singleton on a tour of the facility while showing how far the program had come in the short time of its existence.

While there, both officials highlighted the importance of the program not only for Demopolis, but for the area as a whole.

“I see this as a game changer. If you look at the area we live, there’s a lot of poverty, people out of work, and work just not coming to our communities. We have to travel so far to go and get jobs, but the more people you have trained for the work force the more it says to industry to come here,” Singleton said. “What I saw over there today was basically industry driven. What I would like to see from it is to have more industry get involved as a public/private partnership.”

McCampbell said, “I think this is a program that needs a huge marketing component to it. What I saw at the (Career Tech) building was an opportunity for us to actually prepare young men and women for the workforce. Not everybody is going to college, but everybody needs to be able to have a job in which they’d be able to take care of a family or have supplemental income. This provides an opportunity for people who may not be planning on going to college to prepare themselves for a job that could pay $50,000 to $100,000 a year. The sooner you can get them on that track, the better it is. If you can get them on that track while they are still young, then I think it would help us in our community in terms of young men and women ending up in the prison system. I think if we look at investing in teaching a person how to earn a living, then the possibility of them being a part of our penal system is lessened.”

Keeping citizens out of the criminal justice system is an important issue for the two state officials who are preparing for a legislative session that features a decision on spending $800 million to construct new prisons.

“I would rather spend the money upfront here than to spend money on the back end, trying to lock them up and incarcerate them,” Singleton said. “While the governor of the State of Alabama is talking about building $800 million worth of prisons, I’d rather $800 million be spent on these kinds of programs.”

With the career tech programs located in the city, McCampbell and Singleton believe the future is bright for the area.

“I want Demopolis and the superintendent to understand, you have a jewel here but I want you to market it so the rest of the area will understand the (career tech program) is available to help our whole area,” McCampbell said.

“I think Demopolis has done a good job of putting itself on the map, but we could do better,” said Singleton. “All of us who are elected officials and have some influence need to work together to, not only make sure this kind of program exists, but to ensure duplications of other programs are there. DCSS can only house so much. As we bring in new industry, we have to prepare folks to be ready to work in those new positions. We need to take it to a larger scale. When you get the trained workforce on the ground it’s harder for industries to say they won’t locate to the area. That has been the Achilles heel for the Black Belt, whenever they recruit new industry to the state they always explain that we don’t have the trained workforce. The larger and better we build this program and help it grow, the more we can sell it in Montgomery.”

While visiting Dana Hill’s classroom, the state officials noticed the importance of the unique learning environment as the class made solar ovens to combat debris left behind by hikers on Mt. Everest.

“I saw innovative learning,” said Singleton. “I saw the ability for kids to think outside the box … outside of just standardized learning in the classroom to give them the ability to be creative. I heard from kids understanding their projects and understood exactly what they were doing while working on the Mt. Everest project. They were very knowledgeable, so I was impressed.”

McCampbell added, “I saw a lot of creativity. Children were taking simple concepts and as this young lady was working on the project, she developed a process to reach the answer instead of just having an answer memorized. She used her critical thinking skills in terms of getting to the answer. It was her own way of doing it. She developed a way and got to the right answer.”

“In typical instruction, some would say they were being disorderly,” said Singleton. “A lot of times what we don’t have is something to challenge the inner spirit or that free spirit. Most of the times, children who act out on that free spirit are disciplined and sent to the office. This was a setting that gave the instructors the opportunity to allow that free spirit to flow and be able to do that inductive and deductive thinking. It’s not always about the right answer, but the process of how they get to that point. I liked that process.”

Board members Carolyn Moore and Floy Mayberry as well as Superintendent Kyle Kallhoff accompanied McCampbell and Singleton on the tour.

(This article originally appeared in the Wednesday, Jan. 25 print edition of the Demopolis Times.)