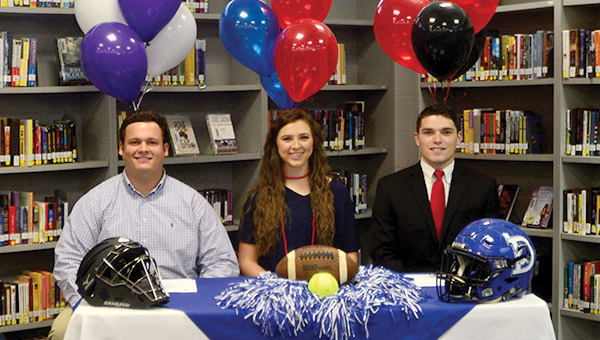 Demopolis High School held a special signing day event for students signing letters of intent to play at the collegiate level. From left: William Douglas signed to play football as well as participate in track and field at Millsaps College, Abbey Latham will play softball at Ole Miss and Logan McVay will play at Jacksonville State.

It was a monumental day for student-athletes, but in particular students from Marengo County as Demopolis High School, Linden High School and Marengo Academy all saw players sign letters of intent to play at the collegiate level. In all, 10 local talents were appreciated on National Signing Day on Feb. 1.

At DHS, three students are taking their talents to the college as William Douglas heads to Millsaps College for two sports, Logan McVay goes to Jacksonville State for football and Abbey Latham goes to Ole Miss and its softball program.

Douglas was also offered a chance to throw discuss, shotput and javelin for the Millsaps track and field team.

“It’s not too far from home and not too long a drive if I want to come home on the weekends,” said Douglas. “I’m pretty excited.”

Coaches at Millsaps told the former tackle for the Tigers that if he wanted to start immediate that he should switch to center, but he was recruited as a guard.

After guiding the Tigers as the starting quarterback this season, McVay heads to Jacksonville State to play slot receiver for the Gamecocks.

“I’m really excited. I’ve been waiting for this for most of my life,” said McVay. “I’ve been playing since I was real young.”

With JSU offering a major Applied Manufacturing Engineering, it became the top choice in the eyes of McVay.

Even though she signed in Nov. 2016, Latham was also honored on the day for getting a scholarship to play at Ole Miss.

“I’m really excited. I think it’s going to be a good experience,” said Latham. “I really just like representing Demopolis.”

Latham, who is a dominant batter in the Lady Tigers lineup, will make her presence felt at the next level in her familiar catcher role.

“I took my visit there and immediately when I left I knew I was going there,” said Latham. “I got that good feeling.”

Latham is the only one of the DHS students who hasn’t played her senior year yet, but her goal for the team is to make the state tournament.

DHS Head softball coach Brittany Dunson was on hand for the on-campus event and offered her thoughts on Latham and her importance to the team.

“I’m happy and proud for her. She worked hard to get where she is today,“ said Dunson. “It’s a big leadership role someone will have to feel once she leaves.”

Four football players from Linden signed to continue their careers as both DeVonta Poole and Bryce Chaney signed to play at Miles, Dequan Charleston heads to JSU and Bruce McIntosh looks to further his football hopes at Louisiana Prep Academy. 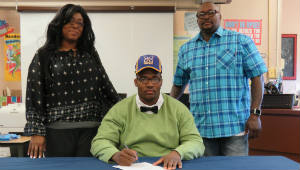 “I’m excited and ready to start practice,” said Bryce Chaney about starting his career at Miles. “I’m going to miss my brothers at Linden and how the teachers helped us do our best.”

Chaney spent most of his time at tackle for the Patriots, but might get some run as an offensive guard for the Golden Bears. 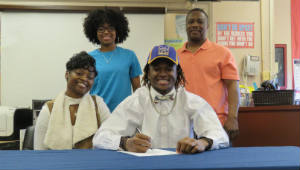 Poole echoed Chaney’s thoughts on Linden and said, “The community really supported us and I’ll miss the team and how we were together and how we bonded.”

The finalist for Class 1A Lineman of the Year will asked to play defensive back, a position he has never played in his time in football. 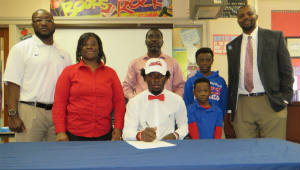 Charleston will join McVay at JSU after signing a scholarship to join the Gamecocks.

“I’m really excited. I like the atmosphere they have there is kind of like Linden,” said Charleston.

The dynamic athlete may see time on both sides of the ball as he was evaluated as a receiver and defensive back.

Tuskegee also offered Charleston a scholarship to play, but he favored the coaching staff of Jacksonville State. 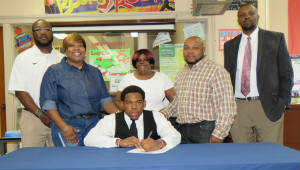 McIntosh heads to Lafayette, Louisiana to join the Louisiana Prep Academy Storm, which is a post-grad academy that helps bolster their development in hopes of getting a college offer.

“They saw my tape and called to see if I wanted to come down there and play,” said McIntosh. “I’m pretty excited, but’s it out of state so it gives me more people to see and meet. I’ll miss my football coaches, teammates and parents while I’m over there, because the give us so much support.”

Point University (Georgia) had interest in McIntosh as well, but the linebacker chose the Storm instead.

Marengo Academy signees are headlined by the softball shortstop Macey Petrey, who joins DHS catcher Latham in the SEC but Petrey makes her way to Mississippi State.

“I’m very excited to go ever there and continue playing softball,” said Petrey. “It was kind of a spur of the moment think. She (MSU Head coach Vann Stuedeman) saw my play on a Friday and had me up there the next week and I got offered.”

Petrey had other offers from SEC schools, but really liked MSU.

“I’m really excited,” said the right-handed pitcher Dunn. “I’ll miss playing in a small town and getting to know everybody.

Dunn’s looking to major in kinesiology and hopes to transition to playing at Ole Miss or MSU.

Meanwhile, Collins heads over to Monroeville

“I’m ready to get started,” said Collins. “It’s a small community, similar to Marengo County. I’ve got family over there too, so it was an easy choice.”

After getting his basics, Dunn will look to major in human resources and continue his baseball career if he can.