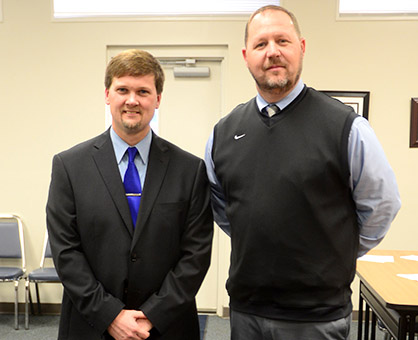 Brian Seymore, right, was introduced as the new head football coach of Demopolis High School during a called BOE meeting on Feb. 2. He is pictured with DCSS Superintendent Kyle Kallhoff.

The Demopolis High School Tigers have a new head football coach in Brian Seymore who was officially hired during a called Demopolis City Schools System Board of Education meeting on Feb. 2.
“I’m humbled, but I’m very excited for this opportunity,” said Seymore. “To me (Demopolis) is an elite 5A program. I think year in and year out you can compete for a state championship and that’s why I’m here and that’s our expectations. I want to set the bar high on our kids to strive each and every year to reach those expectations. We’re going to go to work each and every day to try and put a quality football program on the field.”
In 12 years as a head coach, Seymore has compiled a 69-48 overall record including stops at Pike Liberal Arts (2004-05), Andalusia (2008-14) and most recently Mary G. Montgomery (2015-16).
Seymore spent the 2007 season as defensive coordinator for DHS under then head coach Tom Causey with whom the new coach developed a friendship.
“We go way back. We’re big buddies,” said Seymore. “I had a chance to spend one year with him and loved it. It’s a great community with great football support and had a good run while I was here.”
Along for the move to Demopolis, Seymore brings his wife, Nicholas; daughters, Mary Taylor (ninth grade) and Maggie (fourth grade) and son Drew (seventh grade).
“Demopolis is a football town. They really support it there. They have great athletes that play hard and play with a little swagger. That’s what you want and look forward to,” said Seymore.
The familiar face replaces former coach Stacy Luker, who resigned late in 2016 and later took the head job at Clarke County High School.
“Our kids are anxious. They haven’t seen a face in a month and a half,” said Demopolis City Schools Superintendent Kyle Kallhoff.
Seymore looks to bring his attitude to the program.
“I’m very outgoing, upbeat and energetic. I’m big on body language. I want things done the right way,” said Seymore “I’m a man of integrity and when I say I’m going to do something, I will do it. I want the kids to take the same personality.”
With a new coach comes a different look in the on-field product and Seymore plans to bring some energy and excite there as well.
“Defensively, it’s going to look like organized chaos. I want a lot of people moving around. We’ll use multiple fronts. We maybe three-stack or we maybe bare-front. We run a lot of split-field coverages on the back end. We try to confuse the quarterback to where he starts to question his reads sometimes. We’ll be aggressive and go get ‘em and well definitely want to stop the run. Once you do that, you can put all your pressure packages in and really get after that quarterback,” said Seymore. “Offensively, it’ll be spread-option. Multiple offensive spreads and shifts, unbalanced and up-tempo. We’ll have some run-pass options and vary the tempo week to week depending on our opponent. Special teams will also be very aggressive. We’re not afraid to on-side (kick-off), not afraid to fake punt. As coaches, we set the tone for players. If they know we’re going to be aggressive and take a chance, they’ll be on board. That’s something I take a lot of pride in.”
Seymore was on hand along with Mary Taylor and Drew for the board meeting and attended the DHS basketball games against Thomasville that evening.
“I’m glad I had the time to come here and take a chance to meet the kids, because that’s the relationships I have to build first,” said Seymore.
The new coach also said that he will have to evaluate the coaching staff so that he can have the best coaches in front of the players to be successful day in and day out.

(This article originally appeared in the Saturday, Feb. 4, print edition of the Demopolis Times.)