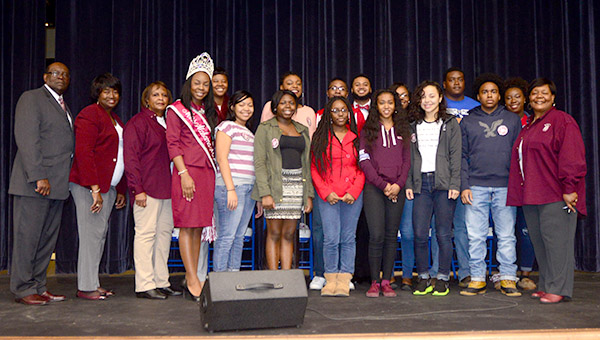 Students from Demopolis High School, Linden High School and Greene County High School were all afforded an opportunity to hear a message from Alabama A&M University President Andrew Hugine during his 2017 Presidential Community Engagement in the DHS auditorium on Feb. 9.
Alongside the president were students currently attending the university who addressed why they chose to attend AAMU and how it has helped advance their lives.
Also during the stop, students from each school received, who qualified, received scholarship awards.
Students from DHS honored include Sylvia Clayton, BreNyGha Edwards, Taylor Sanders, Jorden Simmons and Samatha Williams who received the AAMU Heritage Gold Award worth $20,000 each; Tyleesha Crockett, Alexandria Essex, Makayla Moore and Latracy Wright who received the AAMU Heritage Silver Award worth $14,000; SaDeijah Brown and Rhyan Williams who received the AAMU Heritage Bronze Award worth $6,000 each.
The three-school group in attendance combined for $604,560 of scholarship money.
Tomysha Boykin and Christopher Robinson from LHS and Anthony McGee from GCHS received a Merit Scholarship Award worth $35,520 each.