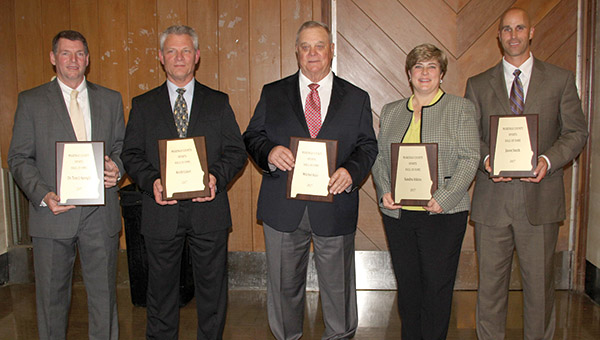 Members of the 2017 class inducted into the Marengo County Sports Hall of Fame during a ceremony Monday evening are, from left, Tony Speegle, Keith Luker, Mitchel Hale, Sandra Atkins, and Jason Smith.

Residents and former sports legends of Marengo County gathered to honor local athletes during the Ninth Marengo County Sports Hall of Fame Annual Banquet and Induction Ceremony Monday night.
Five new members were added to the local HOF, pushing membership up to 41 in the exclusive club. Those new members inducted Monday are Sandra Atkins, Mitchel Hale, Keith Luker, Jason Smith and Tony Speegle.
During her induction, Atkins told a story of her first scheduled softball game at Sweet Water being canceled due to rain. She said that her father, Nolan Atkins, came up to her and said, “There will be other opportunities.” Atkins went on to prove that to be true.
The 1991 Sweet Water graduate credited her athletic ability to her dad, but her competitive spirit to her mother.
Atkins played shortstop at SWHS in the first years of the softball program and went on to play at Shelton State Community College and Troy University on full scholarships. At Troy, Atkins holds a career .359 batting average, which still stands as the school record, and was the first softball player inducted in the Troy HOF in 2016. Atkins was introduced by Stacy Luker.
Lauded for his competitive spirit by his children Victoria and Trent who introduced him, Mitchel Hale praised the HOF as a great asset to Marengo County and its residents.
Hale delighted those in attendance with a story about how he turned down an opportunity to play with the 1961 Mississippi Junior College All-star team in Albuquerque, New Mexico at the suggestion of his wife, Melanie, because he had interviews at other schools.
The decision didn’t hurt Hale as he moved on to Arkansas State College where he lettered two years and was co-captain of the 1963 team.
Hale was a five-year letterman for the Linden Red Devils from 1955-1959 where he played offensive and defensive end as well as fullback. During his senior year, Linden beat Demopolis for the first time in 14 years and was selected as Class A State Champions by the Birmingham News.
Keith Luker was a two-sport athlete at Sweet Water where he lettered three years on the football team under Coach Atkins and started on the baseball team for six years, primarily as a shortstop.
Luker talked about how the people standing on the stage probably did something right and didn’t get there by themselves.
“I know my name is on that plaque, but there ought to be a whole lot of names on it to honest with you. I’m just a very small part of a lot of people who invested in my life,” said Luker.
After SWHS, Luker started two years at Montevallo before transferring to the University of West Alabama (then Livingston University) starting all four years at both schools.
From there, Luker began his football coaching career that included multiple stops as an assistant and head coach, culminating in retirement in 2011 with a career record of 135-113 with 15 playoff appearances.
The youngest inductee of 2017, Jason Smith, thanked all of the members of the community who helped him growing up while developing into a future Major League Baseball Player.
Smith, a 1995 graduate of Demopolis High School from Coatopa, played his youth baseball in Livingston before then-DHS baseball coach Clifton McKnight got him on the Tigers’ squad in ninth grade. The move helped DHS reach the playoffs each year Smith was on the team.
After a successful JUCO stint at Meridian Community College, Smith was drafted in the 23rd round of the MLB amateur draft by the Chicago Cubs.
However, his greatest day in the major leagues came on July 9, 2004, as a member of the Detroit Tigers when Smith bested Minnesota Twins’ starting pitcher Carlos Silva for two homeruns in a 5-3 win for the Tigers.
Tony Speegle was the final inductee of the evening.
The 1976 DHS graduate told a story about how he and his wife, Terri, agreed that if the marriage was to work she’d make the small decisions and he’d make the big decisions.
“Now in June, we’ll have been married in 28 years and had no big decisions,” said Speegle.
After lettering four years on the baseball team at Livingston University (UWA), Speegle stayed on to coach the infield before DHS coach McKnight asked him to come to DHS where the duo won the 1986 state title.
Speegle has a been a steadfast member of the Demopolis community serving as an educator, coach and administrator in the school system as well as a co-founder of the MCSHOF, serving on the Board of Directors and Promoter.
McKnight introduced him as a member of the hall.
The 1977 Marengo Academy State Championship team received special recognition during the ceremony. The team won the first football championship for MA with a perfect 12-0 record, outscored opponents 359-66 and posted four shutouts defensively.
A member of the 1977 team, Webb Tutt was also honored for his coaching role after leading the 2016 Longhorns to the AISA-A championship.
Linden Patriots Head coach received honors for guiding his team to a 13-1 record.
Players honored for their on-field play include Class 1A Lineman of the Year Brandon Bates and runner-up Devonta Poole from LHS and AISA Back of the Year finalist Weldon Aydelott from MA.
Hunter Webb of SWHS received the 2017 MCSHOF Scholarship.