The Marengo County Commission approved a grant proposal worth $350,000 that will help provide 30 families in the Thomaston area with fresh, safe water service during the regular meeting at the Marengo County Courthouse on Feb. 14.
Stacy McKean of Grant Management appeared before the commission and explained how the Community Development Block Grant (CDBG) project is going to connect the water lines over a 1,000-foot stretch between Linden and Thomaston to service residents along County Road 53.
Currently, people living in the area rely on old wells that provide water unsafe to consume and give low pressure to home faucets.
The commission approved both the engineering and grant management proposals McKean presented, unanimously.
Revenue Commissioner Sharon Barkley received the commission’s approval to take part in an aerial survey over the county, spending $25,000 over a two-year span with $10,000 being paid this year and the rest next year. 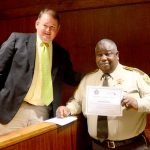 The survey is part of a state-sponsored project and map out a third of the state each over the next three years. Marengo County is part of the first group of mapping and it has to happen quickly before trees begin to bloom for spring.
Marengo County will be surveyed at a one pixel per 200-foot scale. The mapping firm also offers planimetrics which would compare the new photos with those taken the last time the county had an aerial survey in 2008. The company offers a higher resolution for mapping, but Barkley said she would check to see if the cost could be met by the county.
The commission voted leave the Tobacco Tax CD at Sweet Water State Bank for six months, but extend the EMA CD at First Bank of Linden to one year.
Nominations for the Marengo County Economic Development Authority were taken as District 2 Commissioner Jason Windham nominated Justina Quinney Allgood and Mike Robinson was the nominee from District 3. Both were approved. District 4 Commissioner Calvin Martin asked to table his nomination from District 4 until the March meeting.
The Grand Jury report was accepted, but the Commission voted to direct Chairman John Crawford to look into the recommendation to replace some 50 chairs in the small courtroom.
• Other action approved by the commission includes: Approved a resolution for the Alabama County Commissions Association Liability Fund Participation Agreement.
• Passed county levies for alcohol licensing set by the state.
• Approved a request from County Engineer Ken Atkins for a resolution on a change in funding for the Gandy Ferry Road project. Atkins said the resolution was needed after the state made an error.
• Set a one-hour lunch break for all county employees between 11 a.m. and 2 p.m. and the clock-out time at 4:30 p.m.
The commission recognized Sheriff Richard Bates for completing the Alabama Jail Training Academy. Bates attended four two-day sessions of the ACCA-sponsored program.

(This article originally appeared in the Saturday, Feb 18, print edition of the Demopolis Times.)