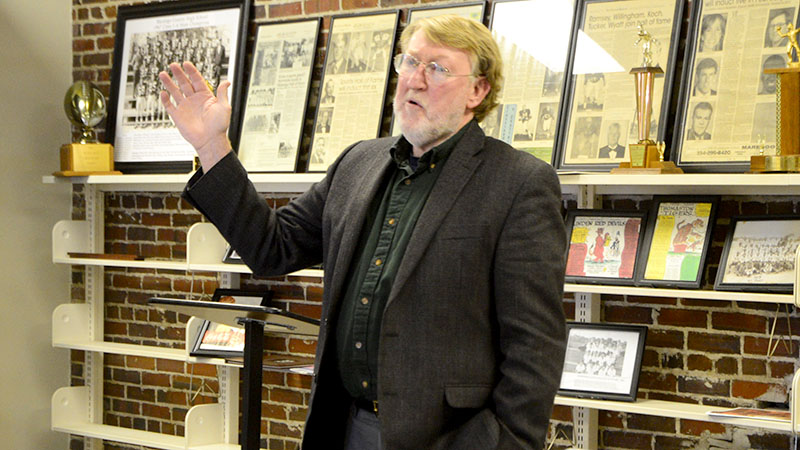 Randall Williams, an author and publisher from Montgomery, was the guest speaker at a Lunch & Learn program hosted by the Demopolis Public Library. Williams specializes in writing books about Southern history and culture.

Author and publisher Randall Williams visited the Demopolis Public Library on Feb. 16 for a Lunch & Learn program.
Williams is a writer, editor and book publisher and the co-founder and editor-in-chief of New South Books, Inc.
“Connie (Lawson) and her nice colleagues invited me over to show some of our books and talk about them,” said Williams.
The native of Chambers County specializes in writing and publishing books about Southern history and culture and brought three books to share with the audience at the library.
One of the books, “Good Times,” is an edited collection of slave narratives from the 1930s in Alabama. Narratives were recorded at that time from people who were slaves in the past. While there were not stories about Demopolis or Marengo County, there were some from Livingston and Uniontown and other local areas.
The book, “100 Things You Need to Know about Alabama” is a collection of vignettes that begins with the pre-history of the state and comes to present time.
The third book, “This Day in Civil Rights History” is a day-by-day examination of the events that took place during the civil rights movement. Some stories are connected, such as Rosa Parks being arrested on Dec. 1, 1955, that set off the chain of events that led to the Montgomery Bus Boycott and Dr. Martin Luther King Jr. marches.
Williams was originally a reporter after receiving his degree from Samford University as a triple major in history, journalism and English.
While working as a reporter, Williams began to notice a theme about the work he was doing.
“As time went by, more and more I began to realize when you’re writing about government and things that are happening today, if you look beneath them in Alabama you find race and our history at the bottom of everything we cover,” Williams said. “Whether it’s education, government, taxation or land use, it’s there and you can’t escape it.”
From being a reporter, Williams went to work at the Southern Poverty Law Center in Montgomery. While there, he oversaw a “Klan Watch” after a resurgence of that group in the 1970s.
In 1989, Williams co-founded New South Books, Inc. in Montgomery.
“I like the book business. I really enjoy it,” said Williams. “Every day I get to learn something new about the history of the state and our culture and I like that.”
His trip to the Demopolis Public Library brought several years of research and knowledge to the city.