DHS softball off to dominant start 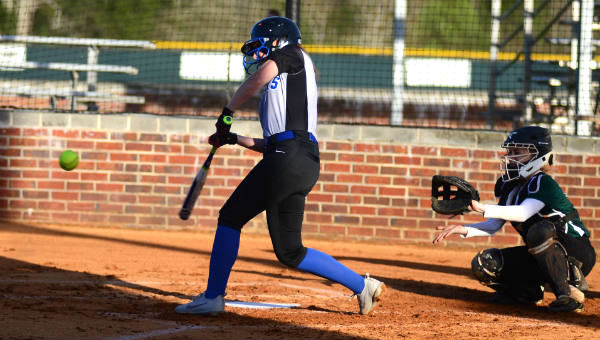 The Demopolis High School varsity softball team hosted Dallas County High School for the first home game of the season and came away with a 15-0 victory in three innings on March 2.

With the victory the Lady Tigers moved to 7-0 on the season and even more impressively have outscored opponents 77-0 during the run.

“They’ve been playing together since they’ve been in about the seventh or eighth grade. They know each other’s ins and outs. They know each other really well. I’ve gotten to know them pretty well too, only being here for two years,” said Head coach Brittany about the team’s hot start and cohesiveness. “But I feel they’re almost like sisters. They’re almost like family. They’re very tightknit and they’re always there for each other. They’re great.”

In the March 2 game, DHS blasted four homers to squash the visiting Hornets as Abbey Latham, Kayla Montz and Bria Brown all smashed home runs in the first two innings and Kendall Hannah hit a solo homer in the third inning to put the game away.

As a unit, the Lady Tigers went 14 of 20 from the plate with eight of those hits going for extra bases.

“They’ve just been very patient with finding their favorite pitch, finding something in the zone that they can really sit back and drive,”  said Dunson. “That’s what we practice every single day.”

The Lady Tigers got on the board in bottom of the first when Latham doubled to center field to score Courtney Smith and  Elly Brown. Bria Brown followed with a two-run homer to drive in herself and Latham, which was followed by a solo home run from Kayla Montz to push the lead to 5-0.

Still in the first, DHS started a two-out rally when Courtney Smith hit a two RBI single to center ans scored Napoleon Roberson and Taylor Smith. Elly Brown followed that with a double to score Courtney Smith and then scored when Latham smashed a homer to centerfield to put Demopolis up 10-0 at the end of the first.

In the second inning, Taylor Smith collected an RBI with a hit to left field to score Hannah. Courtney Smith followed that with an RBI which allowed Alex Abrams to cross the plate to go up 12-0.

Elly Brown doubled in Roberson and Taylor Smith to end scoring in the second inning to go up 14-0.

Then with the first at-bat in the bottom of the third, Hannah ended the game with a homer to centerfield and invoked the run rule and give Demopolis a 15-0 victory.

Along with the game ending home run, Hannah also pitched a perfect game, her second of the season, striking out five batters on 36 pitches.

Alongside the 7-0 record and 77 runs scored with none scored against them, Demopolis is hitting .510 as a team and has 15 runs from five different players led by Ole Miss signee Latham who has five home-runs and 16 RBIs, batting .765 on 13 of 17 at bats.

In three appearances, Natalie Tatum has thrown 26 strikeouts while Hannah has 15 punchouts and Montz has 12.

The Lady Tigers will spend the weekend at the Jan Overstreet Tournament in Thomasville starting with a game against Class 7A Baker High School (5-1) out of Mobile.

The Lady Tigers will travel back to Thomasville for a game on March 7 before returning home to host American Christian Academy on Thursday, March 9.