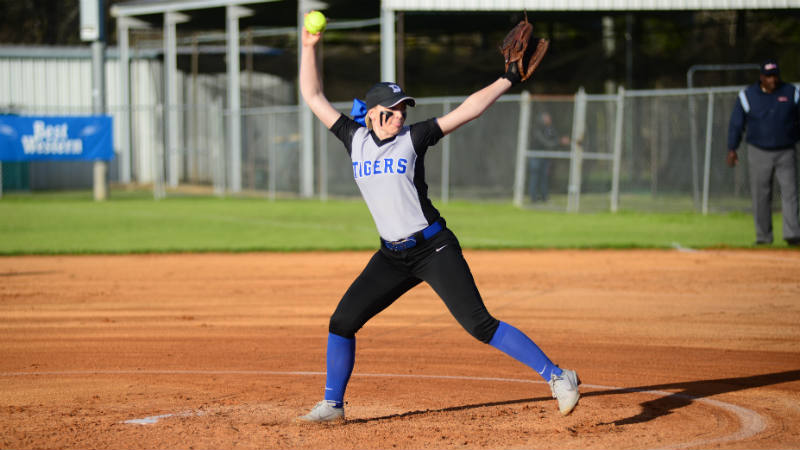 Kendall Hannah was spectacular in the circle and at the plate during the Lady Tigers weekend tournament in Thomasville.

Playing in the Jan Overstreet Tournament, the Demopolis High School varsity softball team continued to pile up impressive offensive numbers. Unfortunately, the Lady Tigers began and ended the tournament with losses to Class 7A Baker High School to finished second in the tournament played in Thomasville March 3-4.

The first contest was an evenly matched back and forth contest with Baker scoring two runs in the first inning and the Lady Tigers (11-2) responding with a four-run inning highlighted by a two-run single by Bria Brown that scored Anna Katherine Aldridge and Courtney Smith. Kayla Montz hit a single and Kendall Hannah notched a double to knock in runs in the inning to give DHS a 4-2 lead.

However, Baker scored two-runs in the fifth and sixth innings to claim a 6-5 victory.

In the second weekend of the meeting, Baker took advantage of the fourth game on the day for Demopolis and ripped 11 hits for a 10-2 victory.

Abbey Latham had the lone RBI on the contest with a solo homer to centerfield in the bottom of the first.

In the four wins on the weekend, the Lady Tigers outscored Washington County, Millry, Leroy and Satsuma by combined score of 39-1.

Hannah  had a great weekend at the plate and in the circle with five RBI while going 11 of 17 from the plate and striking out 20 batters on the weekend including a 14K, 76-pitch one-hitter against Washington County.

Natalie Tatum drew the charge of facing Baker twice, but got 15 of her 20 strikeouts in the circle on the weekend against the large, Mobile based school.