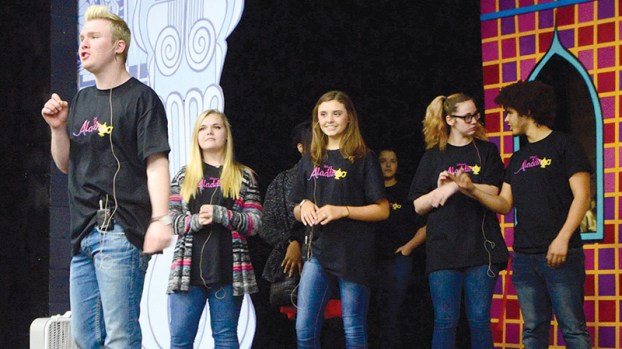 Hunter Bailey is one of several narrators to perform in next weekend’s performances of “Aladdin Jr.” at the Demopolis High School auditorium.

Spring time feels like it has come a bit early in Alabama, but the Demopolis High School auditorium is set to experience some Arabian nights as the Tiger Arts Guild (TAG) prepares for its performance of “Disney’s Aladdin Jr.” March 9-11 at 7 p.m. and March 12 at 2 p.m.

The presentation of the production has been a long time coming for DHS theatre director Jody Tartt and professional production assistant Garland Farwell.

“We’ve wanted to do this show for a long time. Garland (Farwell) and I talked about it years ago and it just happened to be the right time,” Tartt said.

The veteran theatre director said that musicals take time to produce and need an eight-week preparation period and added that the cast and crew have had the necessary time to get ready.

“You have to have a lot of patience,” said Tartt. 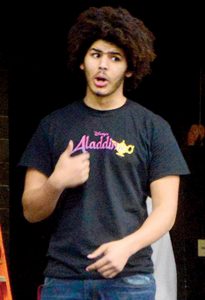 Brian Tripp practices lines in his lead role as AladdinWith such a large cast, Tartt divided rehearsals into different sections to keep the minimum people in rehearsals to make the process more manageable.

“The warmer the weather, the more hyper they get,” said Tartt. “They love this show and have a lot of enthusiasm for it.”

Farwell helps the TAG and DHS theatre for the large productions, but is not a full-time employee for the school system.

Students in TAG take an active role in making the productions the best they can and did some serious work before Farwell showed up to help.

“The students do most of the visual research,” said Farwell. “They found traditional Arabic and Islamic art and architecture, complied a lot of stuff and then we sorted through it to find the things we wanted to do. They do a lot of that leg work and it’s my job to kind of shape it in to something.”

Farwell has worked with the Tiger Arts Guild for the past nine years helping build sets for shows and has been involved in the arts since college. Originally from Los Angeles, Farwell spent over 20 years in New York before moving to the area.

“The energy is really great, their enthusiasm, and just the community sense of things,” said Farwell. “As a visual artist, I’m mostly alone in a studio. This gets me out into a more community setting. It’s great and the young people are a lot of fun. It’s a good thing to do one month a year.”

Being a visual artist, Farwell has his hands in several projects at one time while working on commission for art galleries and painting murals like a current project in Choctaw County.

“Demopolis is a good place with a great environment and Demopolis High is a great place. The kids are excellent,” said Farwell.

Aside from Farwell, Tartt received other outside help for the production.

Charles Jones, career tech teacher and city councilman, helped with the show by hanging the sets built by Garland and Tartt’s classes.

Madeline Jacobs, the new DHS choir director, serves as the musical director for the play.

“That’s been wonderful because we’ve been working within our own department, so that’s been nice,” said Tartt.

With the show set to start next week, excitement is at an all-time high.

“I am really excited to get this show up. I think it’s just beautiful,” said Tartt.

Admission is $8 for adults and $6 for students.