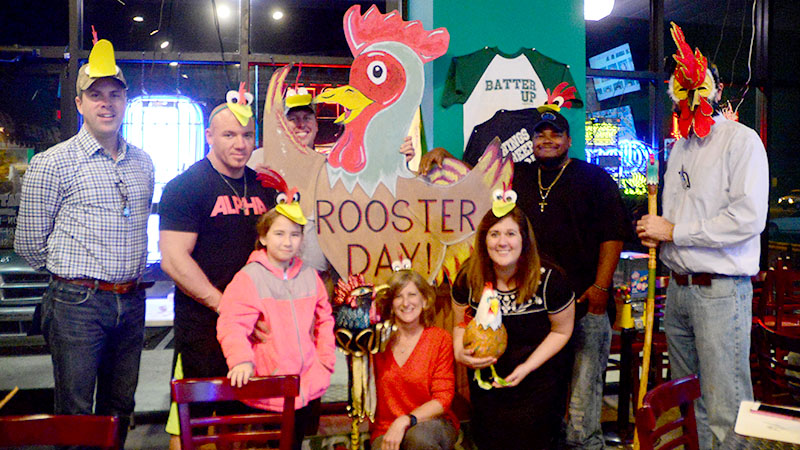 The giant rooster outside of Bryan W. Whitfield Memorial Hospital on the corner of Cedar Avenue and Highway 80 has a name after a Rooster Day themed Trivia Night held at Batter Up on March 9.

The first-place finisher, Ray, won a $50 gift certificate to Batter Up and a party for 20 at her place of work. Winners of the trivia contest also won various gifts from Batter Up.

“I’m incredibly proud of this,” Compton said. “This is one of those things that shows how committed our community is to making Rooster Day successful and it’s because people believe the event helps boost our community and area. To have three people, Woody, John and Barbara, on their own build something like that is pretty amazing..”

Jason Windham, owner of Batter Up, emcees for the Rooster Day auction and supports Rooster Day in other ways, according to Compton. While there was a trivia night last year, organizers said Windham and the committee decided to make it even bigger and tying in the large rooster naming contest.

“There’s nothing like Rooster Day for bringing people together, bringing out the best in people and contributing to our area. It’s amazing and heartwarming,” Compton said.

Compton said she plans to step down as chairperson of the Rooster Day committee after this year’s event to make room for younger members to step up and take the event to the next level.

(This article originally appeared in the Saturday, March 11, print edition of the Demopolis Times.)