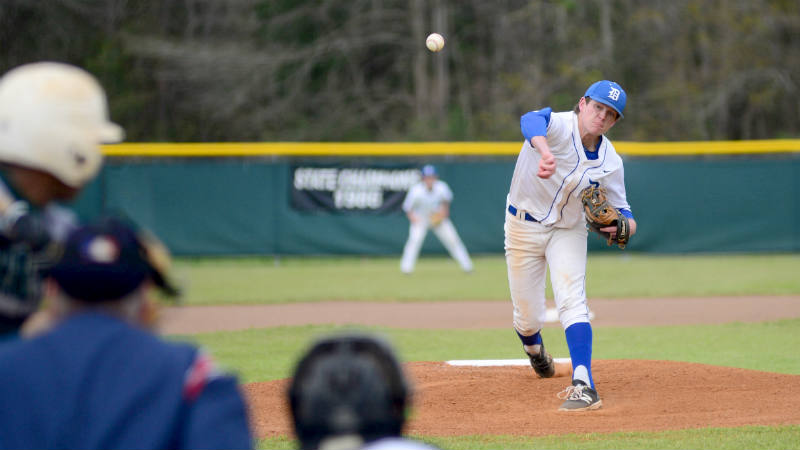 Hunter Colyar pitched four innings and struck out eight batters in the season finale against Selma. Colyar’s effort in the road contest included a nine-pitch second inning without three strikeouts as the senior threw 50 pitches in the win.

The Tigers (16-5) totaled 10 hits in the contest with non going for extra bases.

After reaching on a walk, Chandler Barton scored the first run of the contest in the top of the first, scoring on a passed ball. R.J. Cox grounded towards first base which allowed Henry Overmyer to score as a courtesy runner for Hunter Colyar. A couple of batters later, Ryan Morrison singled home Charles Casper to give the Tigers a 3-0 lead and cap the first inning scoring.

Then in the second inning, Cox notched another RBI this time on a single to score Tyler Jones to move the lead to 4-0.

A comedy of errors in the fourth inning allowed Ryan Morrison to reach. Another error allowed the first baseman to go to second where he was replaced by Hudson Holley, who scored to move the lead to 5-0.

In the fifth, Hunter Thrash singled in Jonathan Lewis. Jones scored Casper on an RBI groundout to make it 7-0.

Selma scored two runs in the bottom of the fifth to close the gap to 7-2.

However, the DHS bats went back to work in the sixth starting with a Lewis single to bring in Barton. Morrison later followed suit with a single of his to bring home Colyar, Will Tuberville and Casper for the final 11-2 score.

Colyar pitched four innings and struck out eight batters, including striking out the side in the second on nine pitches, and only gave up one hit in 50 total pitches to collect the win. Cox work the fifth and sixth innings before Andrew Patterson induced three strikeouts while facing four batters in the seventh.

Demopolis hosts Brewbaker Tech in the first round of the Class 5A state playoffs on April 21.