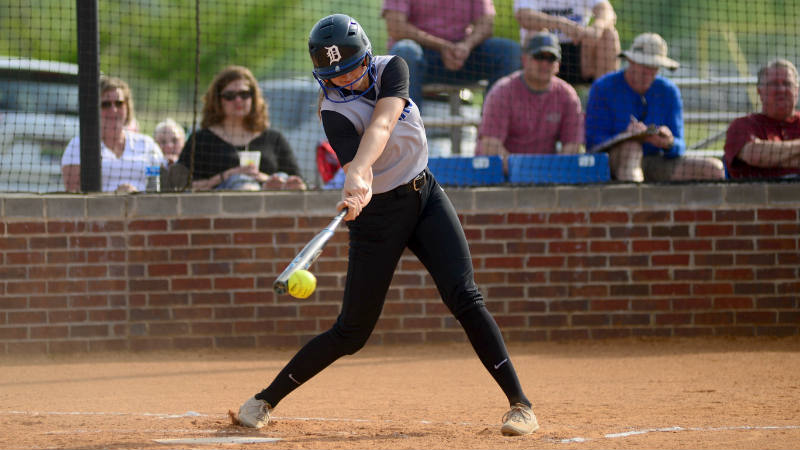 The Demopolis High School softball team briefly trailed after Greensboro scored a run in the top of the first, but that wouldn’t last long as the Lady Tigers (26-7) used three homers to pounce on the visitors to take a 17-1 victory on April 14.

Ke’Aysia Fields scored on an error to put GHS on the board at 1-0, but that was all the visitors could muster.

In the bottom of the first, Kendall Hannah was hit-by-pitch and got the RBI the hard way with the bases loaded as Elly Brown came around to score. Kayla Montz’s single then brought home Abbey Latham to put DHS up 2-1. Bria Brown and Hannah scored on an error to go up 4-1, which was followed by Montz scoring on a passed ball to go up 5-1.

Latham smashed her second homer of the day in the bottom of the third with Elly Brown and Taylor Smith on base to push the lead to 13-1. Hannah got in on the home run action with one of her on to center field to extend the lead to 14-1.

Finally in the fourth, Bria Brown doubled home Taylor Smith and later scored alongside Hannah after Anna Katherine Aldridge singled them both in for the final runs and the 17-1 victory.

Montz finished with eight strikeouts over four innings and allowed only one hit.

The Lady Tigers will host Central-Tuscaloosa on April 20 for senior night as it will serve as the final regular season home game.