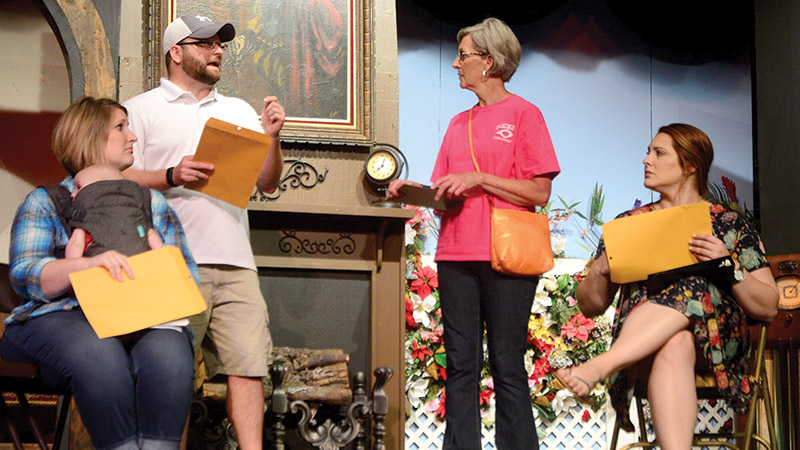 Characters of the Canebrake Players’ production of “Play On!” go through their lines during a practice for this weekend’s shows. Pictured are, from left, Jennifer Swims, Mike Swims, Jennifer Roeman and Kathleen Randall.

(Editor’s Note: This story was updated to include a schedule change announced Thursday. The Monday show has been moved to Tuesday.)

Anything can happen, good or bad, in live theater and the Canebrake Players will explore such things in its presentation of “Play On!” by Rick Abbot on Friday, Saturday and Tuesday, starting at 7 p.m. with a Sunday matinee starting at 2 p.m. at the Old School Theatre on Main Street.

“Play on!” is directed by University of West Alabama theater student Bekah Horton. The native of Pace, Florida, is looking to bring youthful enthusiasm to the Canebrake and has enjoyed her time in Demopolis.

“It’s been fantastic. It’s been a blast,” Horton said. “It’s been very different from the student aspect of theater like I’m used to at the University of West Alabama, but I have fallen in love. It’s a great program.”

The show is about a community theater trying to perform a play, but everything goes wrong. The cast must use their experience to continue the show even when dealing with changes from the playwright.

“People mess up, do things wrong, come in at different times than they’re supposed to and it’s just humor all the way through,” said Horton.

With the show being a play within a play, Horton said it was sometimes challenging for her to tell when actors are truly asking for help or if they are trying to ad lib from the script.

Meanwhile, her favorite part of working with the Canebrake Players has been the actors themselves.

“They all are individually unique and because of that they add a little bit of their own personalities to the characters, and it’s been fun to see them  blossom into whichever character they’ve been cast as,” said Horton.

With the time spent in developing the characters, the young director hopes the community comes to see the fruits of the casts’ labor.

“People need to come because the actors have worked very hard on this show,” said Horton. “This show will be different every night. People will bring props on stage and wearing different costume pieces, so if you’re not paying attention you’ll miss it. If you come more than once, you’ll find the little nuances that are hidden within the show.”

While this is Horton’s directorial debut at the Canebrake, the senior Interdisciplinary Arts Major would like an opportunity to perform in Demopolis.

“Maybe one day. I do plan to come back if I have enough time, but seeing as I graduate in Spring 2018 it may be hard to do,” said Horton.

Tickets for the show are $12 for adults and $8 for students.

(This article originally appeared in the Wednesday, April 19, print edition of the Demopolis Times.)