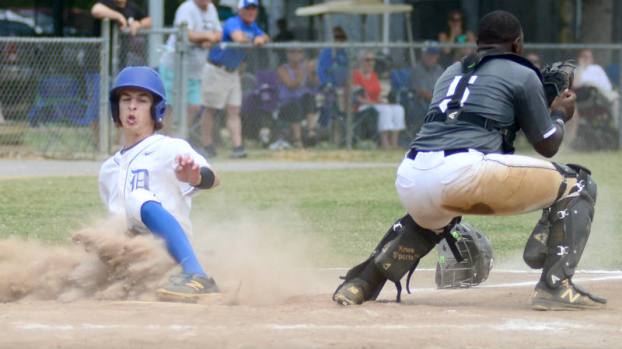 Chandler Barton slides in to score the first run in game three of the first round, Class 5A baseball playoff series between Demopolis and Brewbaker Tech. Barton was walked five times and scored three runs in the high scoring series finale. 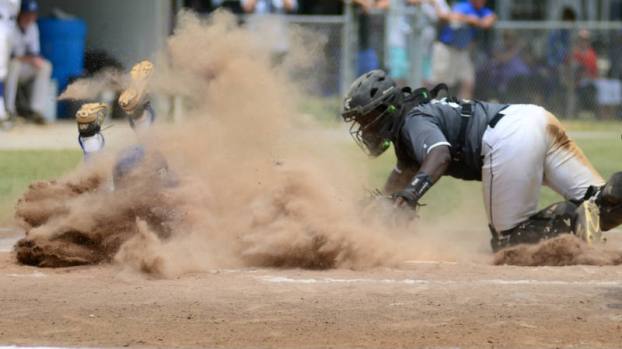 Hunter Colyar slid into a cloud of dust in the first inning. 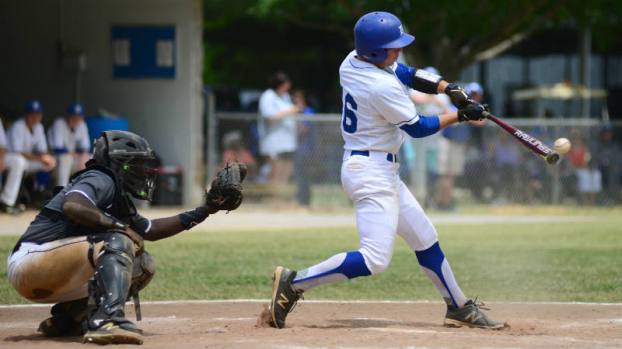 Jonathon Lewis gets the first hit in the bottom of the first. 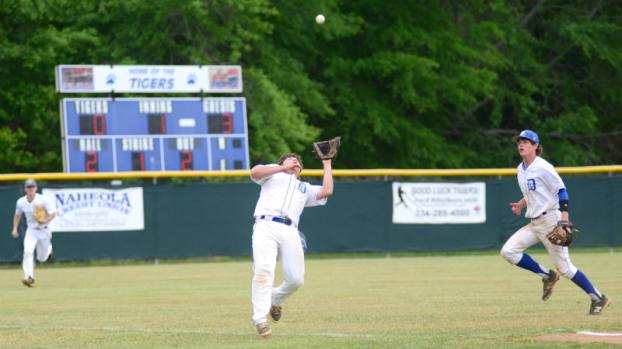 Hunter Thrash makes a tough play at third base to end the top of the first. 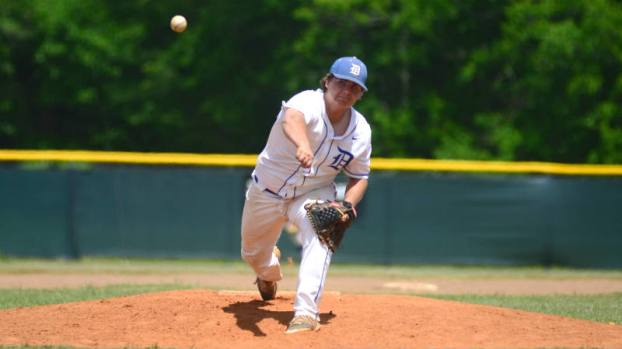 Thrash also came in to pitch in some middle inning relief. The sophomore was on the junior varsity team just weeks ago.

It was win or go home and when the Demopolis High School varsity baseball team fell down 15-13 in the seventh all hope seem lost. However, the Tigers scored two runs to force extra innings and a bases loaded RBI by Charles Casper delivered DHS a come from behind 16-15 in an eight-innings victory in game three of the series over Brewbaker Tech to advance to the second round of the Class 5A playoffs.

Casper took advantage of three straight walks from the visitors to load the bases by hitting a chopper towards third base, which allowed Hunter Colyar to slide home to clinch the win.

The effort couldn’t have happened with out the comeback in the bottom of the seventh. Hunter Thrash came up big for Demopolis (18-6) with a single to bring home Hudson Holley and Jonathon Lewis to tie the game at 15-15.

The forced tie represented the third time the Tigers overcame a multi-run disadvantage in the contest.

“We were down three and came back and tied it. We were down three again and I think we scored seven, which shows a lot of character about our kids. Then, obviously, the big hit by Hunter Thrash in the seventh to tie the game up: a 10th grader there making a big play for us, a big impact for us,” said Demopolis Head coach James Moody.

Chandler Barton earned the victory after sitting down all four batters the usual infielder faced in the relief effort with the game being a high stakes, winner take all affair. Barton was the fifth pitcher used by DHS.

“He threw strikes. He made them put the ball in play. Chandler has thrown pens all year. He has done all our pitching drills all year. He threw a pen last week. We just hadn’t had the opportunity to get him in. It just worked out in the biggest two innings of the year that he came in,” said Moody. “I had (the pitching order) written out and logged out through (Andrew) Fuqua. Then I figured my next one would be Chandler. I hoped we didn’t have to get to that point, but the coaches went in last night and we set it all up. We managed to make it work.”

The first comeback effort came in the bottom of the first where the Tigers promptly found themselves down 3-0. However, that wouldn’t last long as Colyar doubled home Barton, Lewis tripled in Henry Overmyer and Charles Casper singled in Lewis to tie the game at 3-3.

Brewbaker Tech responded with three more runs to go up 6-3 in the top of the third.

Demopolis didn’t stay down long and scored seven runs in the bottom of the innings starting with a bases loaded walk issued to Thrash to bring in Overmyer. Tyler Jones hit a double to bring home Casper and Ryan Morrison. Barton drew a walk to score Thrash, Colyar’s walk scored Jones, Demetrious Davis scored on an R.J. Cox walk and then Barton scored on a Lewis walk to put the score at 10-6.

Tech would not go away and after getting a solo home run in the top of the fourth, the lead was cut to 10-7.

The Tigers however, opened the lead to 13-7 starting with a Cox bases loaded walk to score Davis. Barton scored once more on a Lewis RBI grounder and Colyar scored on a Casper single.

In the sixth, Brewbaker then turned two walks, two hit-by-pitches and two errors into six runs to close the gap to 13-12.

“I don’t remember the last time we blew a lead that big. The tough thing about it for our pitchers was that most of it was because we didn’t catch the baseball. We did that to ourselves,” said Moody.“It just all collapsed right there in like the fifth and sixth. Maybe playing a game like this will help us next week. That has been our motto all year. It’s on the back of our shirts: focus to finish. You don’t know which pitch, which at-bat, which groundball is going to be the one that wins the game. That certainly proved true today with 31 runs scored. That’s ugly baseball.”

It took a total team effort as 15 different Tigers saw action in the contest.

“I think, as much as anything, it makes them all accountable. It makes them understand that, ‘Okay, when I’m at practice I’m not just here to keep a book or keep a chart or chase foul balls. I might have to throw or I might to go in and hit. I think it makes them accountable, but I also think it just brings the group together closer,” Moody said. “I tell people all the time the first two things I try to do every year with a team, regardless of who it is, is for them to trust me and them to build chemistry amongst the team. If those two things happen, we’ll be as good as we can be. I think that builds into that chemistry with those younger guys.”

The Tigers will travel to Beauregard for the second round on April 28.