Blaine Hathcock saw the interim tag removed and was voted to serve as the principal of Demopolis High School going forward during a called Demopolis City Schools Board of Education on April 21. Hathcock has been serving in the role for about five months.

“The students, teachers and parents of DHS deserve consistency and structure. I feel Mr. Hathcock will bring this to the high school,” said Demopolis City Schools Superintendent Kyle Kallhoff. “Since the board placed him there in the interim role back in December, the high school has been operating smoothly and effectively.” 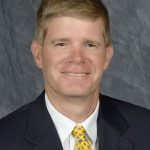 Blaine Hathcock has been named the principal at Demopolis High School.

“It’s a great opportunity for me and I’m certainly thankful to our board and Mr. Kallhoff for showing the confidence in me, so in that sense I’m excited,” said Hathcock. “It’s been a smooth transition here. The teachers have been very receptive. I’m very appreciative in how they’ve accepted me in this new position.”

In his time at DHS, Hathcock has already changed a few things such as traffic flow for picking up and dropping off students. He hopes to continue to pursue enhancing the career tech programs and expand the broadcasting program as well. The principal wants to see DHS leading the charge in career tech, advance placement classes and athletics.

“That’s the goal you have to pursue every day,” said Hathcock. “We want to give our students the best opportunity to be successful when they leave here. Whatever they choose to do. We’re competing globally.”

Hathcock moved to DHS from Demopolis Middle School where he served as principal. His move to DHS came after the resignation of Chris Tangle. Rollie McCall has since served as interim principal at DMS and Tracy Stewart has been the interim assistant.

Hathcock is a Fayette County native who came to Demopolis from Haleyville Middle School where he served as assistant principal three years prior to joining DCSS in 2012.

“I’m leaving a very good staff at the middle school who was also good to me the entire time I was there,” Hathcock said. “They’re a great group of teachers at a great school. It’s a little bittersweet leaving. I’ve been there a long time, we’ve done some good things and I know they’ll continue to do some good things because they have a great staff.”

During the meeting, the board also consented to advertising the principal job at DMS.

“We will advertise the opening at DMS for a month and seek an instructional leader who will maintain the great progress Demopolis Middle School has made over the past few years,” said Kallhoff.