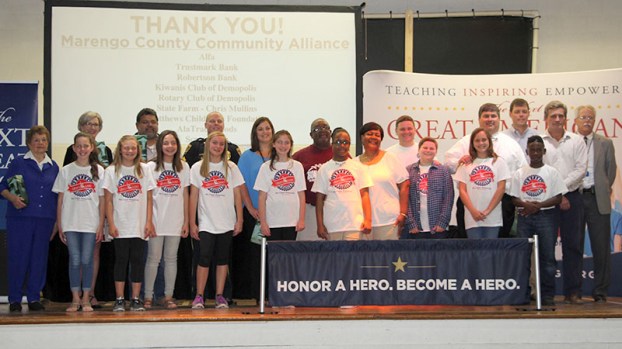 US Jones Elementary students with those they selected as "Super Citizens."

Students at Westside Elementary School and U.S. Jones Elementary School celebrated the end of 12 weeks of learning about the United States of American as the Liberty Learning Foundation hosted its Super Citizens Program at both schools on April 20.

In its seventh year, the program’s overarching mission is to teach, inspire and empower the next great Americans according to Becky Saunders, Vice-President of Development for the Liberty Learning Foundation.

The learning kicked off at WES and USJ 12 weeks ago with a visit from Lady “Libby Liberty” who creates a fun filled atmosphere where the students learn the history of Statue of Liberty and its significance to the United States.

“As the students begin to hear her and they hear about the country and their important role as citizens and important members of the community, they really get fired up at this kickoff,” said Saunders. “We sing our anthem, “You in the U.S.A,” and it just really sets the stage for students to then go back into the classroom.”

It’s at that point the teachers go back into the classroom and discuss the “Super Citizens” program where the students learn about immigrants, veterans, symbols of the county, famous Americans and the great American story about where they come from, where they’re going and the important roles and responsibilities that they have by holding the most important title there is which is citizen according to Saunders

“I think it’s great. I really think it’s something our students need at this level, because it really taught them good character traits and the importance of being good citizens,” said Jackson. “I think at this level, since we set the foundation, that it’s the perfect time to instill in them those great things and what it takes to be a great citizen.”

The principal in her first year of Westside was touched by the show of pride and patriotism shown by the second graders.

“It warmed my heart. It actually made me a little teary eyed, because it lets me see at this young age they value the people who are really going out and making American the great place that it is,” said Jackson. “Knowing that we have people serving as super citizens in different roles, to me it serves as an example to see those people that they chose as heroes because a lot of our kids may or may not have those examples. But for them to choose someone they know really cares about them warms my heart.”

Jackson hopes to see the children implement what they’ve learned from the program in the classrooms and while dealing with their peers.

“It is important that our students understand there are heroes in their own communities.  This is a great program to learn about civics and they can take the things they learn and apply them to their own lives now and into their futures,” said Clark.

The program’s ultimate goal is to teach students to be the next great Americans.

“These students are our future workforce and leaders and if we don’t inspire them to become really good citizens to take part in their important roles in their community, state and country, we’ll struggle to make this a better place.”

With the program in its seventh year, the Liberty Learning staff has been able to see the growth in children who have been through it.

“There’s an obvious decline as far as behavioral referrals,” said Saunders. “Some of the schools have adopted this as a school wide program where they talk about being super citizens every day.”

Saunders said, “These students are starting to learn there’s a place for them in their communities and it means it is really going to help them to understand they do have opportunity, be super citizens and better themselves.”

Being with the program throughout its entirety has helped Saunders experience real change.

Not only does the program benefit the kids, but the adults learn something as well.

“When we have people who are honored as heroes and they take that stage, they realize that somebody is watching them. You think that doesn’t make them want to be a better person or continue to do good works? That’s why it’s good for the kids to see the people on the stage so they believe they can do that,” said Saunders.