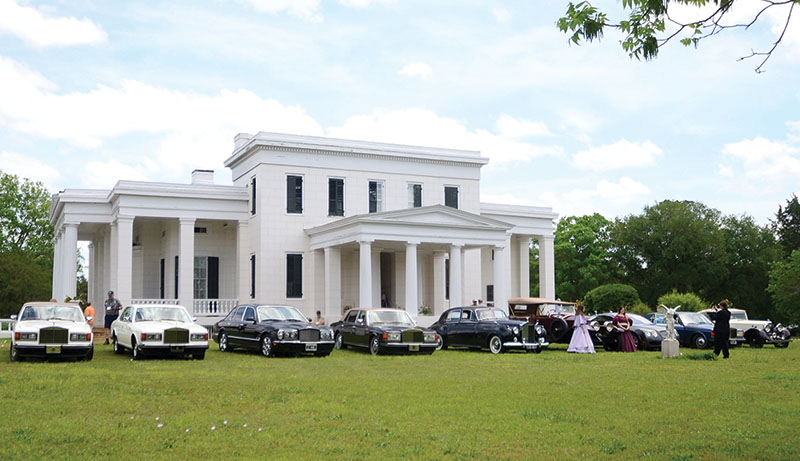 Multiple models Rolls Royce and Bentleys lied the yard in front of Gaineswood as members of the Rolls Royce Owners’ Club visited Demopolis and the historic homes of Gaineswood and Lyon Hall as part of a week long tour of Alabama.

The Gaineswood Historic National Landmark and Museum played host to visitors from the Alabama Chapter of the Rolls Royce Owners’ Club on April 26 as part of the organization’s “Hub” tour of Alabama.

The Demopolis stop featured a tour of Gaineswood and lunch at Lyon Hall.

This “Hub” tour is based in Montgomery and involves daily road trips to places of interest. The first day the group took a tour around the Montgomery area. Tuesday featured a trip to the Barber Vintage Motorsports Museum in Birmingham.  Thursday featured a house tour of sites in Eufaula and the tour ends on Friday at the Jasmine Hill Gardens in Wetumpka. 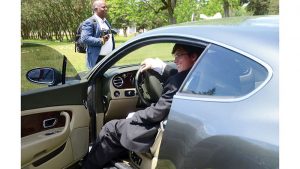 Martin Meyer, director of the Alabama RROC chapter, lives in Montgomery and the RROC has a tradition where several members of the club from all over the country host a tour and invite fellow members from around the country.

The tour hosted by Meyer is the first one ever in Alabama and featured 17 vehicles.

“I decided to host (a tour) here so people could enjoy what we have to offer,” Meyer said. “Over the past 15 years, I discovered Demopolis and Gaineswood and have been here several times and I wanted everyone from everywhere else to see it.”

“It was very important to host this event, because we are going to lose state funding in December and we’re trying to get more people interested in touring Gaineswood and possibly joining the “Friends of Gaineswood” and helping us out,” said Gaineswood Site Director Paige Smith.

According to Meyer, the RROC is for people who are enthusiastic for Rolls Royce and Bentley cars. Owning a Rolls Royce or Bentley isn’t required to be in the club, but most members do own one or more of the cars.

“People who appreciate the engineering, the styling and the art of the design of the car will like the club,” said Meyer. “They have a reputation for being the best cars in the world. Some people always want the best.”

Meyer has been a member of RROC for 21 years and hosted another tour of this kind in California 20 years ago.

“I realized that one of my first memories as a child at 3-years-old was going to buy a car with my father, so I’m really a car person,” said Meyer. “Then somewhere along the line I realized I don’t like every car. I really like the best ones.”

Meyer remembers a time his father was taking classes at Columbia University in New York and drove him past a Rolls Royce dealer.

“I admired those cars and now I have one after all those years,” he said.

The Gaineswood staff enjoyed the visit from the RROC club members.

“It was very exciting to have them here,” Smith said. “It actually worked out great because we were running out of room by the end. Two or three of those cars I would’ve loved to get behind the wheel and take a picture. They were just amazing. The people were great and were just open, friendly and welcoming that we could go in the cars if we wanted to.”

While Meyer loves his Rolls Royce and the memories he has with it, he wouldn’t recommend getting the vehicle just for the sake of owning an upscale automobile.

“If you could possibly prevent it, you should,” said Meyer jokingly. “Repairing them is like going to the jewelry store … it’s a very expensive hobby. On the other hand, if you’re really into mechanics, like to work on things and really appreciate great engineering and design quality, you can do it. A lot of these people do their own work on these cars. I would not buy one as a status symbol. Tours are fun, but everything that goes into keeping them running isn’t as fun.”

While no tours of this kind are currently booked, Gaineswood has quite a few events coming in the summer including a photography exhibit starting May 7, which will be ongoing for a month, with an afternoon tea opening reception and book signing on May 18. There will also be a ladies’ Victorian Tea on the front porch on May 20 at a charge of $10 per person.

(This article originally appeared in the Saturday, April 29, print edition of the Demopolis Times.)