‘The Eleventh House’ celebrated at Gaineswood 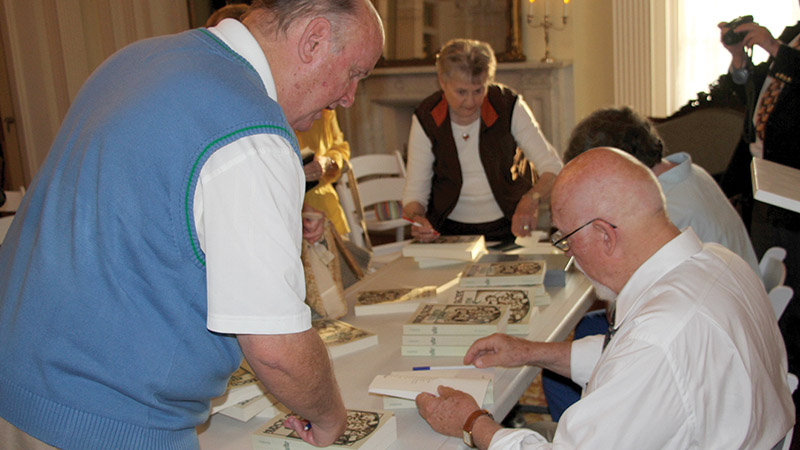 Dr. Don Noble of Alabama Public Television’s “Bookmark” signs copies of Hudson Strobe's "The Eleventh House" during an event at Gaineswood celebrating the re-publication of the novel. Noble wrote the forward in the new edition of the book.

Dr. Don Noble of Alabama Public Television’s “Bookmark” spoke to an audience Thursday at Gaineswood about the life and times of author Hudson Strobe. The event was held to mark the re-publication of Strobe’s book, “The Eleventh House,” by the University of Alabama Press. Strobe, while being born in Illinois, grew up in Demopolis, graduating from Demopolis High School at the age of 16. “He was born in Cairo, Illinois, to his everlasting regret. He wished he had been born in Demopolis. But, his father was from Huntsville, so that made him a Southerner by descent. He moved to Demopolis in 1905 and love it here, writing about it glowingly.”

Following a champagne tea on the grounds of Gaineswood, the audience gathered in the grand drawing room for Noble’s presentation. Dr. Noble wrote the introduction in the re-published novel, worked with Strobe at the University of Alabama for several years.

“The Eleventh House” is a memoir published one year before Stobe’s death and recalls his life in Demopolis up to his dramatic escape from Sweden on the eve of World War II, returning to Tuscaloosa. At UA, he became internationally known and befriended authors such as Ernest Hemingway, H.G. Wells, and F. Scott Fitzgerald.

Also noted during the event is that Dr. Noble will be presented the Governor’s Arts Award during a ceremony Wednesday.

(This article originally appeared in the Saturday, May 20, print edition of the Demopolis Times.)