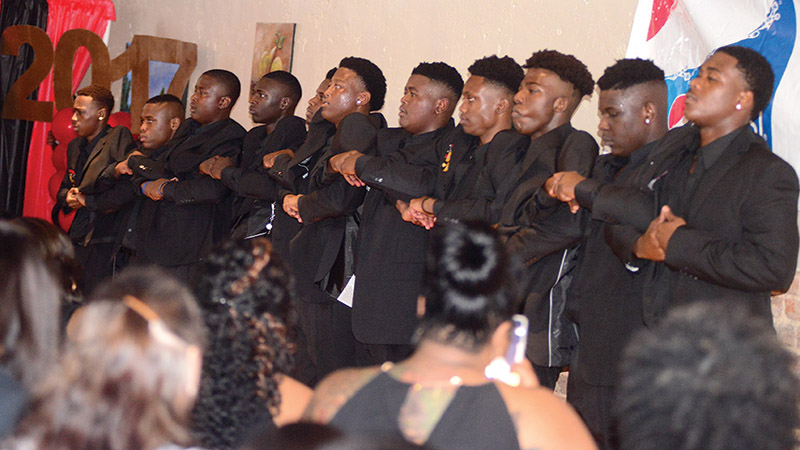 In front of a crowd of friends and family, members of a new, local organization, Mu Gamma, celebrated the end of a three-month probationary period with a show to announce their presence in the Demopolis community on May 20 at the Coplin Building in downtown.

Mu Gamma is a step group that is also focused on providing community service. Co-founded by Anthony Kemp, Michael McClain and Hollis Bright, Mu Gamma is not affiliated with any one of NPHC fraternities. However, McClain is a member of Kappa Alpha Psi Fraternity, Inc.

“After the probate, it’s strictly community,” said Kemp. “We don’t go out and do step shows, it’s all about community service. We pick up trash, we go visit the elderly at nursing homes, we’re pretty much all over the community.”

Kemp and Bright also started a girls group, Theta Psi, in 2015 and has had three different classes of initiates. After time passed, interest in starting a boys’ group emerged and the duo alongside McClain stepped up to demand.

“That’s what we’re about,” said McClain about Mu Gamma’s commitment to community service and being a positive outlet. “We have this group of guys, some are on the football team, a couple are on the basketball team and some are in the eighth grade. It’s not just high schoolers. We take this seriously and we let them know before they even got into Mu Gamma that they had to have a certain GPA and maintain good grades. We let them know that it’s not all about the stepping even though you may see other groups doing it. We want them to see the big picture and not see the finish line before running the race.”

Bright talked about why he felt the need to get involved.

“It’s very important (to have Mu Gamma), because I tell the boys when I was growing up we didn’t really have something like this,” said Bright. “We had some help coming up, but it wasn’t as organized as this is going to be. I’m so happy for these guys. I don’t do it for me. I do it for the kids and the youth. It’s really important for me and I take it very seriously.”

Joining the group gives the young men an opportunity to see there’s more to life than self-interest while understanding that being a positive force in the community is important.

“You have to do something with yourself,” said McClain. “We’re trying to help you go from young boys to become great men in the community.”

“We try to teach the boys about self-respect, moral values and accountability,” said Kemp. “Before you can hold anyone else accountable, you have to hold yourself to that high standard.”

While no harm came to the group of young men attempting to join the organization, the trio of Kemp, Bright and McClain did challenge the group in preparing them for life moving forward.

“The process we put them through was to show them things are going to get hard and get tough, but we teach them that it doesn’t mean to give up,” said Kemp. “It’s going to get tough and things are going to come your way. That’s why you can’t get in trouble being in this group. If you do, you get kicked out. We can’t have it. It teaches them that self-accountability. You can’t go out in the real world and do what you want to do with no repercussions. That’s not how this works.”

Kemp hopes that Mu Gamma will be able to help the members fill out FAFSA forms for college and take the group on college tours to help, as well as hopefully establish future scholarships.

The community service efforts will also benefit the college resume.

“Everything they’re doing with community service will be documented and recorded by the city,” said McClain. “I’ve told them this is going to long good on college resumes, because out of anything we try to tell them education is the key. Get something that no one can ever take from you which is an education.”

According to McClain, Mu Gamma already has several community events planned to start after Demopolis High School graduation as one of the members is expected to walk across the stage on May 26.

(This article originally appeared in the Wednesday, May 24, print edition of the Demopolis Times.)