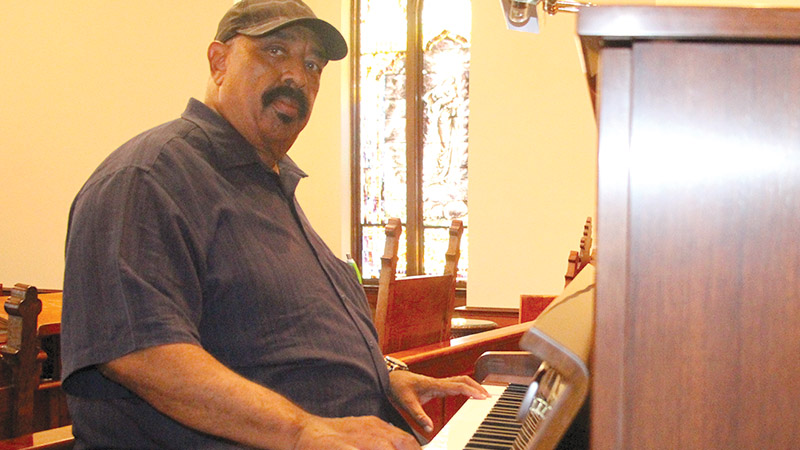 Pastor William Branch sings lead vocals on “I Got Jesus and That’s Enough,” a song he co-wrote along with Tony Nixon and Delendra Peterson. The song is being featured on local radio stations and is beginning to get airplay in other markets as well.

Hoping to enhance his ministry through his music, Pastor William M. Branch’s new single, “I Got Jesus and That’s Enough” is playing through local airways to glorify the name of the Lord.

The song, which features Branch on the lead vocals, was written by Tony Nixon and Delendra Peterson alongside Branch and has been playing on radio throughout the month of July.

Branch’s song can currently be heard on local stations such as 106.5 The River and 107.3, both FM stations, and is also beginning to get airplay in other markets. It was released as a single on cdbaby.com on July 11.

“I wrote the song in a little room in a trailer and I want people to know that God can bless us anywhere if you’re obedient and do what He tells you to do,” Branch said. “Always put God’s plan and purpose as a top priority over everything else.”

Branch recorded the track in Muscle Shoals at the historic Fame Recording Studios.

“It turned out really great,” Branch said. “God used the beat to get the message out.”

While the single currently can be heard in local markets, Branch hopes that the word spreads and he can reach an even larger audience.

“This is a song that will touch people’s lives all over the world. This isn’t just local,” he said. “This is a nationwide record that will speak to every ear that wants to hear that it’s a necessity to have Jesus in their life. Because when you have Jesus, you have everything over everything. That’s a top priority — or it should be a top priority — for every individual in this world.”

The Forkland resident worked in the music industry before being called back home to preach the Word of God and is currently the pastor of Ebenezer Christian Center in Forkland.

Branch believes in educating people spiritually because the traditional ways of church passed down by generations may not be the most effective way to serve the Lord.

“I hope people can understand that Jesus has done a lot for us and we take it as a secondary thing. I think we should bring back to remembrance that He’s done a lot for us in order for us to be accept Him as our savior,” said Branch. “Also, they’re a lot of benefits to having Jesus in your life such as the healing that takes place. God, Jesus and the Holy Spirit work together in divinity. I think when people take seriously what God has done in their life already, their life will change. Education is great and is a must, but having Jesus along with the education … nobody can stop you.”

Branch hopes the success of the single will lead to recording a full album, using any money made to help people who need support.

The single, “I Got Jesus and That’s Enough,” can be purchased through online music retailers and will be available soon on Amazon.

(This article originally published in the Wednesday, July 12, print edition of the Demopolis Times.)