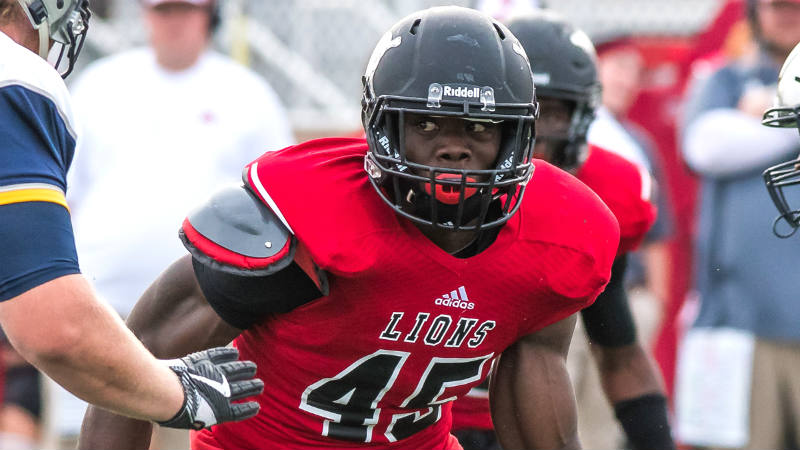 Tim Bonner, DHS alumnus, is one of the featured players in the second season of “Last Chance U” on Netflix.

With the second season of “Last Chance U” released on Netflix on July 21, Demopolis High School fans and alumni may notice a familiar face as one of the featured stars as Timothy Bonner makes his presence felt in the critically acclaimed series.

Timothy Bonner, otherwise known Tim, is a Class of 2015 graduate of DHS.

Before graduation, Tim signed his letter of intent to play football at the collegiate level for the Louisville Cardinals.

Unfortunately, an injury before the start of his freshman year changed everything for the defensive end.

Tim left Demopolis and headed to Louisville for summer workouts in July of 2015.

“I had a whole month of summer workouts. It was hell but I pushed through and made it,” said Bonner.

After shoulder surgery, Tim began to feel like Louisville wasn’t the proper fit for him.

“I just felt like Louisville wasn’t the place for me, so I transferred to East Mississippi to get recruited again,” said Bonner. “If I could rewind time, I’d gone JUCO (junior college) first to be honest.”

Despite having originally having offers from more local schools such as Mississippi State and Ole Miss during his first round of recruiting, Tim initially chose Louisville because of connections he made with the coaching staff.

“The D-Line (defensive line) coach (L.D. Scott) had been recruiting me since my tenth-grade year so we had been knowing each other for a long time,” said Bonner. “We had a good long relationship and that’s how I ended up committing there. He was the first person to ever recruit me.”

After that year in Louisville, he transferred to East Mississippi Community College to continue football career

He did this by showing his improvement in the weight room, showing off his personal and physical growth each time the opportunity presented itself to the EMCC coaching staff. By the time summer camp arrived, Tim had improved so much in stopping the run because of the work in the weight room, he made the cut to be a member of the squad beating out around seven other guys who had to pursue their football dreams elsewhere.

With this new opportunity Tim thrived and was named the starter at defensive end for the first three games. However, when scholarship offers started pouring in for him, Tim and the coaching staff agreed it would be best for him to a rotational player to allow guys behind him on the depth chart to get looks for a potential scholarship.

“Coach told me I had all the offers I need and other people need offers, so I became part of the rotation,” said Bonner.

Tim feels that playing for EMCC was a great opportunity for him especially after the school was featured on the Netflix series “Last Chance U” last year.

As it turns out, Tim and his family along with other members of the EMCC Lions will be featured on the second season due out summer 2017.

Aside from being featured on the show, the move to JUCO allowed Tim to play in a different type of environment.

“It was different playing JUCO cause you have guys who committed to DI (NCAA Division I) schools or left DI, so it’s just like you’re playing DI but at a lower level,” said Bonner. “Playing junior college football gets you prepared to go DI because I wasn’t ready for it at first, but now I’ll be ready when I go back.”

Bonner continued, “JUCO football is really a grind. It’s a struggle cause at higher levels they might give you things. But at this level you have to earn it.”

Tim admitted that he had a tough time adjusting to life at EMCC at first, but as time came for school and the football season to start life at the JUCO level became fun for him.

Recently, Tim made a decision on where he’d spend the rest of his time in college.

“I got to looking at FAU through coaches like Chris Kiffin. He was the Ole Miss d-line coach and recruited me in high school,” said Bonner.”

While Kiffin was at Ole Miss, Tim actually committed to the Rebels but decided later to decommit from the school and reopen the process.

When Kiffin left to take the defensive coordinator position alongside his brother and head coach of FAU Lane Kiffin, Chris contacted Tim to gage his interest in coming to Boca Raton.

Meanwhile a coach that was recruiting him at Southern Cal took a job at FAU as well as another Ole Miss coach.

Lane Kiffin also reached out to Tim in the recruiting effort in hopes that he can help that defense establish a winning culture.

With all those parts moving in that direction, it all made sense for the former DHS athlete to make his commitment to FAU which he did on Jan. 17.

At FAU, Tim will have three more years of eligibility left to contribute to the team and major in Communications.

Like many others who play in college, the dream for Tim is to play in the NFL. However, if he falls short of that goal Tim already has a plan to join his brother in his trucking business.

Time also receives great motivation from his family and they point out he’s the first in his family to play college football and the first with a chance to play in the NFL.

“I can’t see myself doing anything else. I feel like football has kept me out of trouble and it will help me make millions one day,” said Bonner.

Ironically, the activity Tim couldn’t see himself being a part of today was something he didn’t start until middle school.

“I didn’t like football when I was coming up. I started playing in 2008,” said Bonner. “My friend introduced me to football. He just said to come try it.”

Tim would do just that coming out year after year and before his senior year, he had five scholarship offers in hand before the rest poured in that season.

“I didn’t know I was going to play college football in high school. I was just playing football to play and get it over with,” said Bonner.

Although his family spent some time living in New Orleans and are avid Saints fans, Tim spent most of his time growing up in the Demopolis area and receives words of encouragement often from members of the community to keep pushing him to the greatest heights he can reach.

“When you do make it, everybody tries to motivate you to keep going because a lot of people wish they could be you,” said Bonner. “When I was young, I used to look up to the football players and wonder why they didn’t go to big time schools. They were good, but just didn’t make it. I wondered how I got the opportunity and they didn’t.”

With the support of the community and his family, Tim heads to FAU with his eyes on domination.