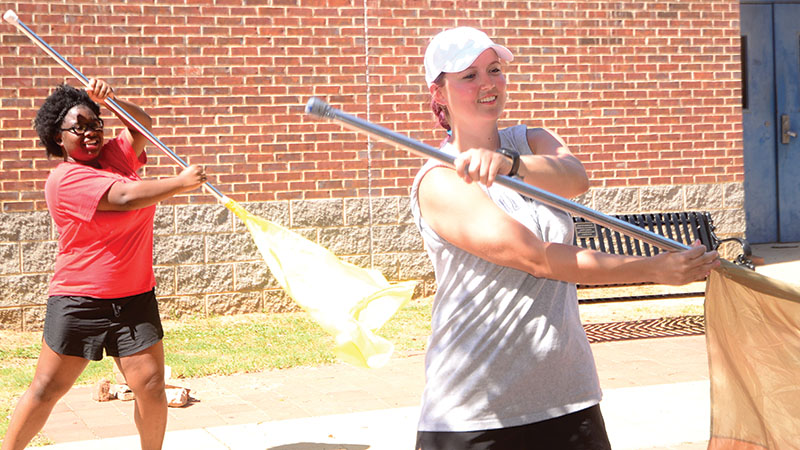 Bekah Horton shows members of the Demopolis High School River City Blue color guard a routine for one of the halftime show songs during section rehearsals at band camp.

A common theme between those instructors happens to be a shared alma mater in the University of West Alabama as well as those instructors being members of The Scarlett Band at some point during their undergraduate years at the Livingston based school. 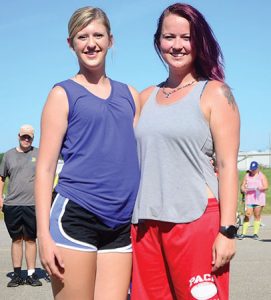 While all of the guest instructors have done well, Horton and Newton have helped the auxiliary units step up to a new level.

“They have done phenomenally,” said DHS River City Blue Director Demetrius Scott. “They’ve gotten right on board with our vision and what we want to do to change to a superior mindset. These young ladies are working hard, pushing them and that’s exactly what we wanted. To me, entertainment is great, but if you get the superiors (at competition), entertainment takes care of itself.”

Horton pointed to Laura Clements as the one who reached out, bringing her to Demopolis for camp.

“Bekah and I judged the AISA Theater competition together. We met each other then and we got to talking about her background and what she did,” said Clements. “When I was asked to come up with a color guard instructor, she was the first person I thought of.”

Clements had Horton send in her resumé and sit in on color guard tryouts as well. After doing both, Horton was asked back to help at DHS.

“Both of them have a really good work ethic and their technique is really solid. I can see a difference in the girls and they’re really working hard,” said Clements.

“I competed in Winter Guard International program for the four years I was in high school, then was enlisted by Glenn Smith (retired band director of UWA) to come help with the Scarlet Guard and I choreographed with them for two years,” said Horton. “I’ve been focusing on theatre, but Laura asked me to come back. Now I’m back and I’ve enjoyed it.”

Newton, talented and knowledgeable in her own skills of dance, was brought over through an association with Horton.

“Bekah messaged me over the summer to let me know that Demopolis was looking for somebody to help with the dance line, so she put me in touch with (Clements). From there, she called me and asked me about my background and I told her I’ve taught classes before and taken dance since I was a kid; I was competitive dancer for four years, Alabama state dance champion for two years, dance line captain at my own high school (Jackson, Alabama) for two years and a veteran of the UWA dance line,” said Newton.  “I felt I was more than equipped to come and help these girls and I’m grateful for the seven girls we have, because they’re definitely dedicated.”

There has not been a lack of effort being returned by the DHS students.

“The students here definitely love the band,” said Newton. “They’re high school students of course, so they have their flaws but other than that they’re more than willing to do everything possible to better themselves as dancers, color guard members and band members in general. I’m proud of where they’re going.”

Horton added, “It’s been fantastic working with the color guard here. All of them are very dedicated to what they do and it’s clearly evident they go home and practice even when they’re not expected to. Every single one of my students put forth the effort to make sure they’re not only giving their best performance on the practice field, but they’re doing it when they go home and practice as well. They’re giving 100 percent commitment the entire time.”

UWA Scarlett Band Director Adam Anderson is pleased with the impact his current and former students of the program have made throughout the summer.

“I think it’s wonderful. I love it when students can get out and work with programs,” said Anderson. “Demopolis isn’t the only one, there’s several schools in the area where students have work during camps. I think it’s good. We need to have community outreach and a lot of these guys come from programs that are similar. Bethany went to Jackson for example. It’s good to see them out and about, working and teaching the next generation.”

Also, the UWA students could eventually help the college program in the long run.

“On a pragmatic side, there’s a recruiting aspect of it. (The campers) get to see and experience the kids that are in our program and kind of look up to them as instructors. Hopefully they like the way the instructors run rehearsals. Typically, in band you run rehearsal the way rehearsals were ran for you. They might see that they like to rehearse like that or I like being around people like that,” said Anderson. “As far as my students, if you have the ability to teach flag spinning or drums or any kind of musical performance to a younger generation I think that makes you little stronger as a performer. Also, it helps with the group dynamic when they get back up here and start working with the university students. They may have a different perspective being on the instructor side and not the student side, so that will help rehearsals move faster and get a little more production out of it.”

(This article originally published in the Wednesday, August 2, print edition of the Demopolis Times.)