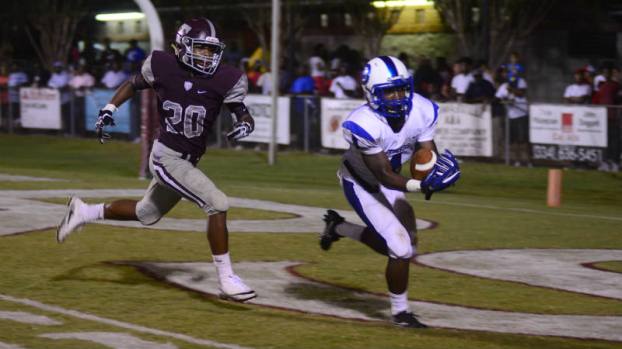 DeDe Davis scores first touchdown of the season on this reception. 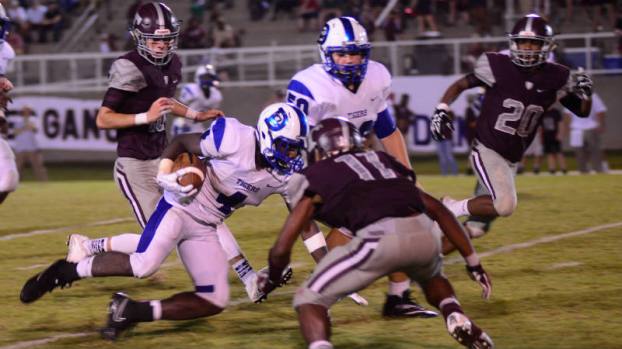 AJ Jackson finished with over 100 yards with some tough running. 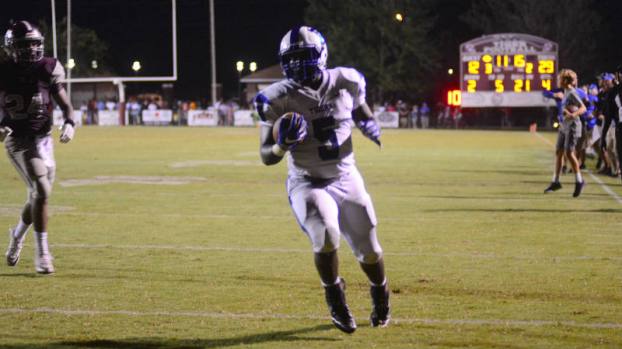 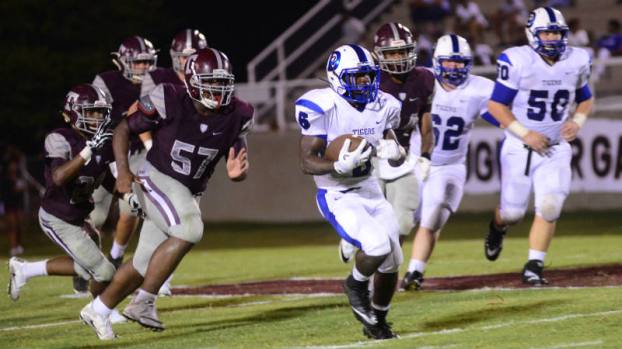 “This is the most disappointed I’ve been in a long time as a head coach. I felt like we didn’t play to our ability and that starts with me and ends with me. I’m to take the blame for this one and I promise you we’ll rebound next week,” said Seymore.

Thomasville got on the board quickly when Corrigan Thibodeaux connected with Bralen Washington for a 69-yard touchdown pass to put THS up 7-0 after a converted PAT by William Vick with 9:42 in the first quarter on a one-play drive.

The two connected once more on a short touchdown to put Thomasville up 14-0 with 4:47 left in the first.

Demopolis did not go quietly in the opening quarter as AJ Jackson pounded in a 4-yard run to put DHS on the board with 2:04 on the clock. However, the try for two points failed to keep the score at 14-6.

Thomasville responded with a 1-yard run by Jacquez Ausbon followed by a two-point conversion by Deandre Jackson to put the home team up 22-6 at half.

After forcing a stop to start the third, a roughing the punter penalty gave THS new life and led to a Thibodeaux 2-yard quarterback draw and coupled with a Vick PAT, Thomasville claimed a 29-6 lead.

Demopolis responded with two touchdown passes from Andrew Patterson first with a 28-yard pass to DeDe Davis in the third and then with 6:50 in the fourth to Tyler Jones for 21 yards to cut the THS lead to 29-18 and give the game it’s final score.

“We turned the ball over too much. Countless mental mistakes and misalignments and that starts with coaching,” said Seymore.

Patterson threw for 179 yards and connected on 20 of 42 pass attempts. A.J. Jackson led the rushing game with 98 yards.

As a team, Demopolis put up 394 yards of offense, but surrendered 339 yards on defense.

Despite the hard luck loss, Seymore found some positives.

“I saw some good things. I saw some players step up and some young guys step up and look pretty good,” said Seymore. “We have to get back to the basics. We got to take care of the football and you can’t make mental mistakes on third and short. You know they’re going to run the freeze count. It’s something we worked on every day. We kind of had the deer in the headlights look tonight. I apologize to the Demopolis faithful, because that’s not the way you want to start the season. That was very disappointing for me, everybody, the coaching staff and players. We’ll be back for sure.”

The Tigers will prepare for next week’s home opener in Tiger Stadium against Greensboro.