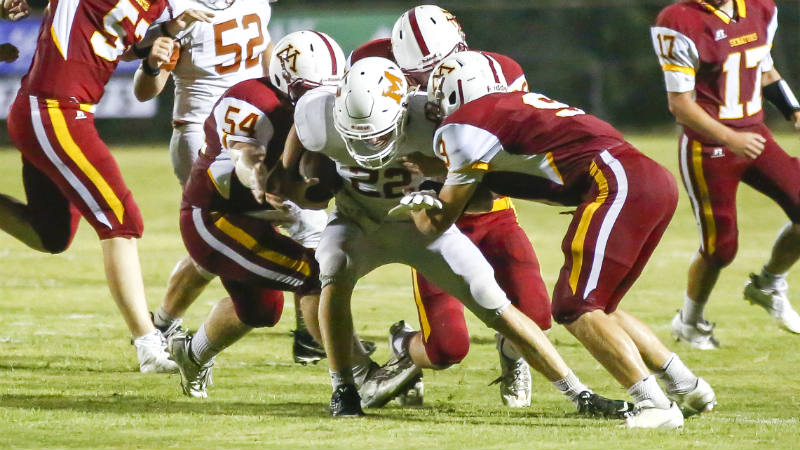 Junior Casey Cramer looks for running room against a what proved to be a very stingy Morgan Academy defense.

An explosive offense and a stingy defense lead Morgan Academy to a 57-6 victory in the season opener Friday night against Marengo Academy.

In the first period Peyton Egbert connected with a wide-open Britton Adams, who scampered down the field for a 76-yard touchdown.

The Morgan Academy defense came up big again when the Longhorns fumbled the snap on a punt in the end zone on fourth and long. Morgan’s Kevin Zhang jumped on the ball, giving the Senators a 14-0 lead with 1:50 to go in the first quarter.

Marengo Academy answered back with a long drive and a short touchdown run from William Drake, the Longhorn’s only points on the night.

“We were right there in it the first quarter … we just had a few key fumbles, and the momentum went their way, and once it went their way it never came back to us,” said Marengo head coach Lebo Jones. “We’ve got a young team and not any depth hardly, and it showed. We’re just worn out.”

The points kept pouring on for Morgan Academy who would score 43 unanswered points in making the final of 57-6.

Marengo Academy will host Monroe Academy for their home opener in Linden on Thursday, August 31.