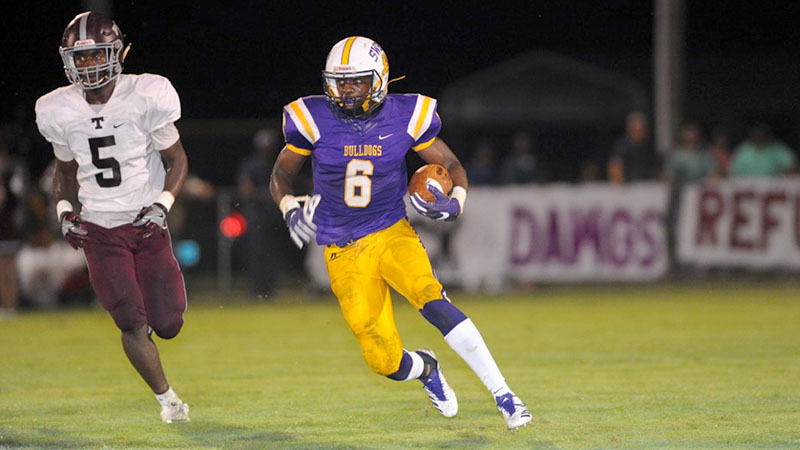 Sweet Water hung tight early, but costly mistakes in the second half spelled doom as the Bulldogs took a tough 36-15 loss to the visiting Thomasville Tigers.

Thomasville broke the scoring silence midway through the first when Trent Sams got aggressive on a pass attempt from Corrigan Thibadeaux. The aggressiveness allowed the ball to fall in the hands of Bralen Washingston who took the catch 55 yards to the house. THS converted a 2-point try and went up 8-0.

An interception by Sasha Smith setup the Bulldogs with a first and goal which Jonah Smith took advantage of, scoring on a quarterback draw. Jacory Brown ran in for two to tie the game at 8-8.

The Tigers came out in the second half more aggressive than ever and sped up the no-huddle attack to wear down the Bulldogs.

On the very next drive Shamar Lewis fumbled on a run, but Sams had his back picking off Thibadeaux in the end zone to end the THS scoring threat.

However, the reprieve didn’t last long as on the next THS drive Thibadeaux hit a pump fake to free up Washington on the SWHS sideline for a 33-yard touchdown to go up 22-8 in the third.

Another Bulldog mistake reared its head as a bad snap sailed over the punter’s head to allow Thomasville to setup shop on the SWHS 35-yard line.

After Thibadeaux and Washington converted another long 4th down, the junior quarterback found Powell in the middle of the endzone once more to go up 29-8 on the 12-yard play with 24.5 seconds in the third.

Sweet Water did not go quietly as Smith kept a roll out play alive long enough to find Jaland Lewis-Horton who scampered down the sideline 31 yards for a score to bring the score to 29-15 with 7:10 left in the game.

However, THS’s game plan to wear down the Bulldogs worked as running back Jayla Toler got his squad all the way to the 2-yard line and Quez Ausbon finished the job on a direct snap to push the lead to the 36-15 final.

Lewis led all rushers with 98 yards on 13 carries, Jaylon Williamson carried nine times for 75 yards and Jacory Brown racked up 53 yards on 15 attempts.