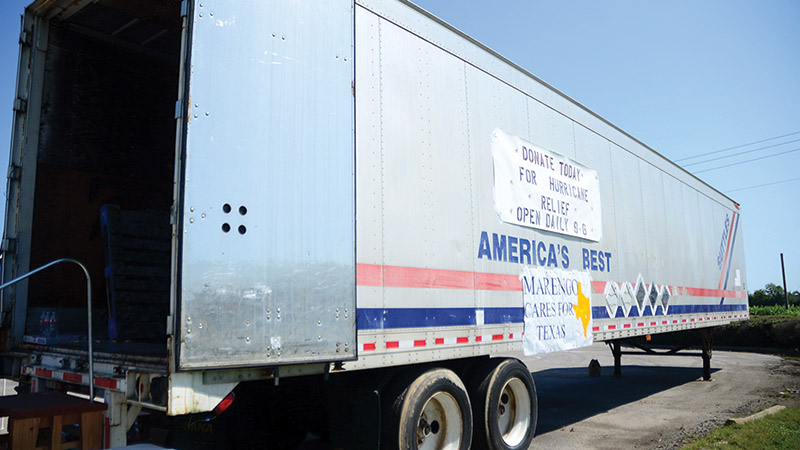 Items to be donated to the victims of Hurricane Harvey may be dropped off at Vowell's where a truck is being filled. Organizers say once the truck is filled for Texas victims, another truck will be made available for those affected by Hurricane Irma in Florida.

Efforts to help victims of Hurricane Harvey have gotten underway in Demopolis as a trailer is parked in the Vowell’s Fresh Market parking lot and is steadily filling up with needed items to take to Texas.

Volunteers and city officials will be at the truck each day from 9 a.m. to 6 p.m. to take items of donation.

During the Sept. 7 Demopolis City Council meeting, Mayor John Laney announced the trailer will be in its location until filled and then will be shipped to Texas.

Volunteers from local churches have manned the truck, donating their time and effort to make sure donations are properly filed away.

“We know the people out in Texas need the relief and help,” said Talmus Williams Sr., on of those who are volunteering at the site.

“We’re inviting everyone to come out and help with raising of supplies for victims of Hurricane Harvey in Texas,” said Marengo County Commissioner Freddie Armstead in an earlier converstation. “What we’re trying to do is get water, baby food and baby supplies and anything of that nature.”

While Armstead did call the meeting to organize the effort, he called on leaders from local churches, elected officials and residents to rally the community effort and help the Texans effected by the hurricane. The meeting was held at Kora’s Place Restaurant.

“This is not an individual or political thing. We’re just trying to help other people in need right now and we felt like if we were in this situation they would help us also,” said Armstead.

As of Friday morning, the trailer was about quarter full. Once the trailer is filled, it will be taken to drop off sites to benefit those affected by Harvey.