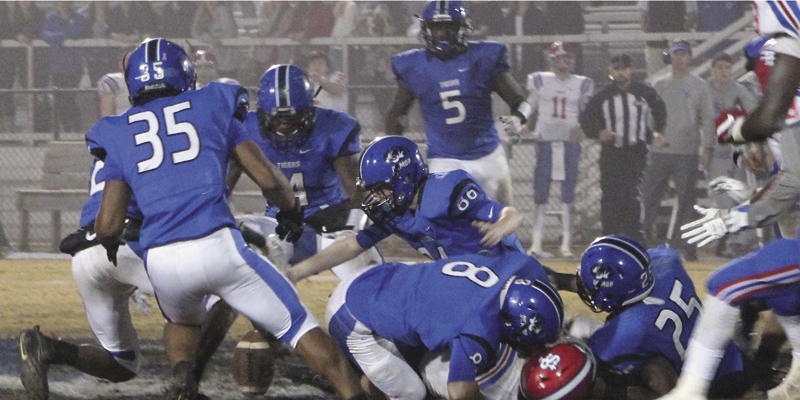 The Demopolis kicking team fights for a loose ball on an onside kick late in the fourth quarter.

The Demopolis Tigers could not get much going early against the St. Paul Episcopal Saints in the semi-finals of the 5A state playoffs. Trailing by 13 points and having yet scored its first points going into the fourth quarter, the Tigers mounted a comeback that ended just short — on a two-point conversion for the lead with only 43 seconds to go.

DHS Head Coach Brian Seymore said that while his team played most of the game from behind, he knew his team had what it takes to rally. 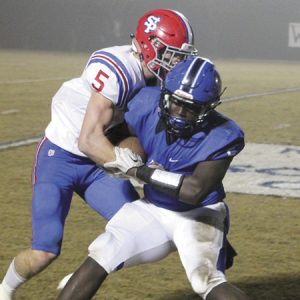 Tyler Jones makes a tough reception and then breaks away for a 32-yard gain that led to the Tigers’ first points of the game.

The Tigers fell behind early in the first, 3-0, and were down 13-0 at the half.  The Tigers finally got their first points early in the fourth, but then gave up another touchdown, allowing St. Paul’s to take their biggest lead of the game at 20-6. But, Demopolis turned to its running game and made some explosive plays through the air that, combined with a turnover and an onside-kick recovery, made the score 20-19 with only 43 seconds to go. Deciding to go for the win, Seymore called for the two-point conversion that ended up falling as an incomplete pass and securing the victory for the Saints.

“It was a disappointing ending. We wanted to get the ball in the hands of one of our best playmakers and, you know, (St. Paul’s) just made the play,” Seymore said.

The Saints took their first lead on the first series of the game when they drove the ball to the Demopolis 29-yard line. From there, the DHS defense stiffened and forced a fourth-and-nine. St. Paul’s Wilson Beaverstock was good on a 46-yard field goal to take the early 3-0 lead.

The Tigers struggled to find running room early on against the Saint defense and the passing game was not clicking.

The Tigers’  mustered enough offense late in the first to drive to the 48-yard line before punting and backing the Saints up to the 11-yard line. But, on a third-and-eight, quarterback Swift Lyle found Jarrett Eaton for 16 yards and a first down. Later, Jordan Ingram would find running room for 20 yards. As the second quarter began, the Saints were knocking at the endzone with a first-and-goal from the 2-yard line. The Tiger defense stood strong, but on third dwon Jordan Ingram plowed his way into the endzone and the PAT made the score 10-0.

Later in the quarter, Beaverstock would hit another field goal, this one from 40 yards out, making the score 13-0 at the half.

Things were going about the same for the Tigers in the third. Their first three possessions were three-and-outs and St. Paul’s managed another field goal attempt, which this time sailed left and was no good.

The Tigers took possession late in the third and almost lost a fumble, which was recovered by Tyler Jones. On a third-and-18 play, a pass interference called moved the chains and kept the Tigers hopes alive. A few plays later, Andrew Patterson found Jones who made a tough catch and broke a tackle for a big 32-yard gain to the 11-yard line. A.J. Jackson took over from there, scoring on a 4-yard touchdown run to cut the lead to 13-6. The point-after attempt was no good.

A short kickoff and a nice return led to good field position for the Saints on the ensuing possession. Then, from the 40-yard line, A.J. Finley broke a tackle and raced to the endzone to give St. Paul’s a 20-6 edge with only 8:15 to go in the game.

The odds were stacking against the Tigers when their next possession ended on a failed fourth-down conversion. But, the defense came up with a big play when Keionte Whitfield recovered a fumble at midfield.

Another interference call helped out the Tigers and then a 14-yard pass from Patterson to A.J. Jackson set Demopolis up at the 34. Tough running by Jackson and A.J. Besteder moved the ball forward and then, from the 15, Patterson found Dede Davis for the touchdown. Malaki Simpson’s point after made the score, 20-13 with 3:28 to go.

The Tigers’ attempt at the win instead of overtime came up just short when a pass from Patterson to Jones fell incomplete.

While the Tigers fell just short of the state finals, Seymore said his team finished strong and can be proud of their accomplishments.

“These are hardworking kids who gave it their all and never gave up,” Seymore said. “I have to credit the seniors for that … they really set the tone for this season and did a great job in leading this team. I’m super proud of these kids and our coaches.”

(This article originally appeared in the Saturday, December 2 edition of the Demopolis Times.)