While the Demopolis High School boys’ basketball team prepares for its area contest Thursday, the girls’ team saw its season come to an end with a loss to Sumter Central Monday night. 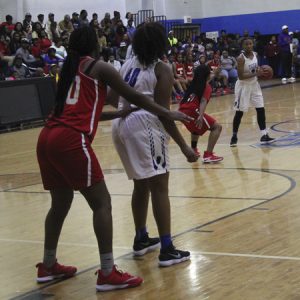 DHS’s Aniya Johnson looks to make a pass as Samia Jackson works to get open against a Greene County defender.

The Lady Tigers traveled to Tuscaloosa Monday where they lost in the area tournament to Sumter Central, 31-25.

The Lady Jaguars led from start to finish and will now play the host team, Central High School, in Tuscaloosa on Wednesday for the area title and the right to host the first round of the sub-state.

The Lady Tigers finish their season with a record of 7-14.

The Demopolis boy’s (19-9) next game will be on Thursday at 5 p.m at Central High School in Tuscaloosa where they will play for the area title against the Central Falcons and the right to host the first round of the substate. The loser of that game will move on to sub-state as a visiting team.

Central Tuscaloosa and Sumter Central were tied atop the Area 7 Class 5A final regular season standings at 3-1, but the Jaguars are ineligbile for the post season due to playing too many regular season games. 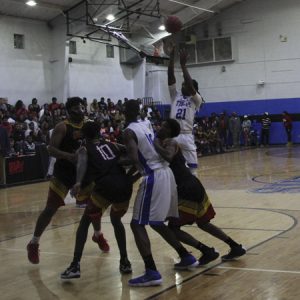 Keyjana Waller shoots for the Tigers as other players jockey for position to get the rebound.

Both the DHS girls’ and boys’ teams played their final regular season contests on Friday, Feb. 2, hosting the Greene County Tigers. It was senior night for the Tigers who honored their seniors for their contributions.

The girls went on to hold off the Greene County Tigers by a score of 37-30.

Meanwhile the boys (19-9) did not fair as well as they fell short against the defensive oriented opponent by a score of 39-36.

The Tigers were led by Melvin Childers with 8 points, Shakari Williams with 7 points and Nelson Haskins with 6 points.

(This article originally appeared in the Wednesday, February 7 issue of the Demopolis Times.)