Demopolis High School continued its winning ways on the diamond, scoring a 5-1 victory over Central-Tuscaloosa on Friday, March 23. 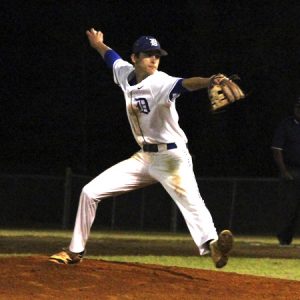 Hudson Holley pitched four innings, giving up one run in addition to an RBI at the plate.

Central took an early lead over the Tigers, scoring one in the top of the third, but the Tigers got their offense going in the bottom half of that inning to take the lead, 2-1.

The Tigers would carry that one-point edge into the bottom of the sixth inning when they added three more for the 5-1 win.

Taking the mound for the Tigers was Hudson Holley who pitched four innings, giving up one run while striking out seven. He added one RBI at the plate.

Hunter Thrash also drove in a run for the Tigers while Charles Casper and Demetrius Davis each had hits.

(This article originally appeared in the Wednesday, March 28 issue of the Demopolis Times.)