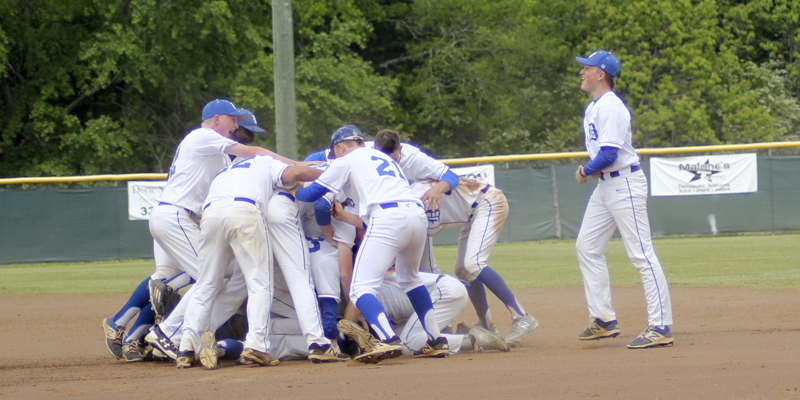 The Demopolis Tigers baseball team pile on Peyton Geary between first and second base Saturday after the sophomore hit a single to complete a come-from-behind walk-off victory over Marbury in the first round of the state playoffs. The Tigers were behind 5-1 going into their final inning but rallied with a series of hits leading up to the dramatic finish. The two teams split a pair of games on Friday to set up the winner-move-on contest Saturday. With the victory, the Tigers advance to face Sylcauga in the second round, which will begin Friday in Sylacauga.

The Demopolis Tigers baseball team advanced to the second round of the playoffs winning a best-of-three series in dramatic fashion against Marbury this past weekend.

After splitting a pair of games on Friday, the two teams battled for a spot in winner-moves-on contest Saturday. 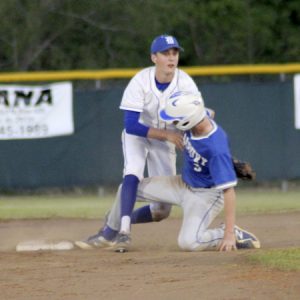 Demopolis gets the out at second.

Marbury took the first game Friday by a score of 9-2. Demoplis tied the series at one each winning the second game 4-3. Demopolis clinched the series on Saturday with a come-from-behind walk-off hit victory, 4-3.

In that final contest, the Tigers scored one run in the bottom of the first inning when D.D. Davis crossed the plate. But, the Demopolis bats went silent as Marbury continued their attack and built a 5-1 lead.

It was not until the bottom of the seventh that the Tigers’ bats came back to life. Hunter Thrash led off the inning with a single to left. After a flyout, Davis singled to center putting runners on first and second. Andrew Patterson followed with a single to right, loading the bases and still down by four runs.

The next batter, Davis Petrey, singled to center driving in the first run of the inning and cutting the deficit to 5-2.

With the bases still loaded, Charles Casper ripped a triple to the left field fence clearing the bases as Davis, Patterson, and Davis Petrey scored tying the game at 5-5 with a runner on third.

Marbury continued to struggle in recording the final outs as they walked the next two DHS batters to load the bases once again.

It was Peyton Geary who came to the plate and dropped a single to bring home the winning run and securing a 6-5 victory for the Tigers.

With the first-round victory, the Tigers will travel to face the Sylacauga Aggies for the second round beginning Friday, April 27, at 5 p.m.

(This article originally appeared in the Wednesday, April 25 issue of the Demopolis Times.)